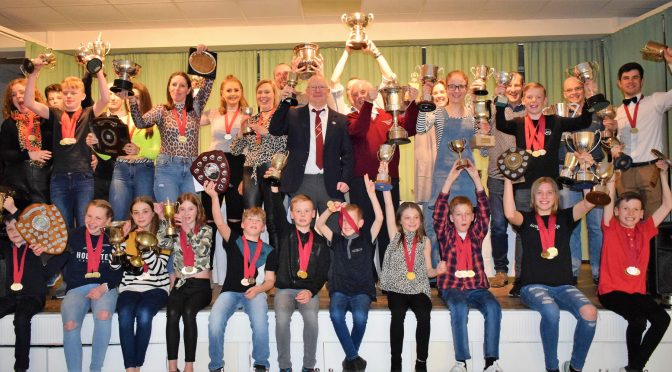 Presentation night was the occasion but entertainment and fun were the order of the day.

With a plethora of prizes to be presented to worthy recipients, over 100 members, their families and friends all congregated to appreciate the formal side but guests were also treated to a highly entertaining evening.

Slickly hosted by Rory Anderson, bedecked in a crisp white shirt and black dickie bow, the Club compere kept a good pace to proceedings as he dished out praise and mickey-taking in equal measure. With plenty to get through, Club President Alan Coltman was soon on stage to offer his opening remarks and the night was off and running.

Looking back on the season, Alan described his two favourite moments. The first being the three Harriers (Fraser Clyne, Eilidh Jaffray and Iona Jamieson) who had been selected to represent the East of Scotland at the Inter District Cross Country races in Stirling. A great achievement for both runner and club.

This led him onto his most favourite of moments as Alan described; “A young lad stopped me one night at junior training and beaming with pride said, Alan, my Papa is World Champion.”

The young lad in question was Alfie Walker and his Papa of course is Sammy Walker. Unfortunately, Sammy couldn’t be there on the night but he had good reason. The next again day he would be winning the V60 British Cross Country Championships in Belfast.

The night flowed smoothly, much like the excellent bar service provided by Square One and the halfway point was soon upon the evening. Time for a quick bite to eat, recharge any empty glasses and settle down for part one of a DVD looking back over the 2018-19 season, compiled by Bruce Hughes.

Many laughs later it was time for the next batch of presentations. In the second half, as is customary, the winner of the Senior Men’s Cup Race is invited to say a few words. In a reflective but funny way, now five times champion, Francis Cannon gave great respect to the honour which he had earned.

Also within the second half, trophies including the Coltman Challenge Cup (for most outstanding athlete of the season), the Jimmy Grierson Memorial Trophy (for first Senior Man in the East District Championships), the points prizes and also the Presidents Medal were awarded. As well as all this, the latest Harriers trophy, the JMS Cup, was presented for the first time.

The Coltman Challenge Cup winner, as selected by the committee, could only go to one person. World Masters 10k gold medallist Sammy Walker was a more than worthy winner. This was the third time Sammy has collected this particular piece of silverware having previously won in 1991 and 1986.

The Jimmy Grierson Memorial Trophy was claimed by Brian Harper for his run at Aberdeen in December. The points prizes, for competitive efforts over the season in club races and District and National Championships were won by Alan Coltman (Senior Men), Ishbel Inglis (Senior Women) and the Junior prize was scooped by Glen Jamieson.

The winner of the Presidents Medal is the choice of Club President Alan Coltman and is awarded to someone who provides a great deal of service to the club and to the President himself over the space of the season.

This year’s worthy recipient was Alan ‘Pye’ Reid for all his help towards making the Scottish Masters such a successful event as well as all the Historical and current results work that he provides promptly and accurately to the club.

The JMS Cup was heading back to Langholm as Iona Jamieson become the first ever winner. Donated by local painter and decorator Malcolm Scott it was awarded to the most successful competitor in the eight race Border Cross Country Series held over the winter months.

With the formal side complete it was now time for the second part of Bruce’s DVD and then for guests to swap stories of a very successful season and for anyone who felt inclined to have a bit of a dance as the lights came down and the music cranked up.

The Club and the committee would like to extend a huge thanks to everyone who has contributed towards our season. From runners to officials from handicappers to volunteers and all the family and friends who bring the kids along to training and races.

Many, many thanks but please remember that the racing season may be over but training continues as normal and soon the Summer Time Trial Series will recommence.