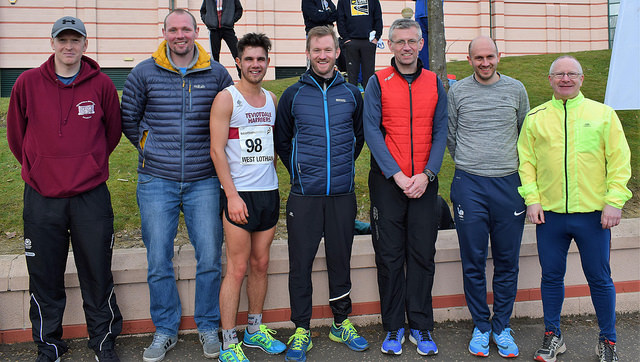 For the fourth year in a row Teviotdale Harriers were represented at the 6/4 Stage Scottish Road Relay Championships, held at Livingston.

This National event features two races, one for men and one for women. Six runners for the men and four for the women would tackle alternate 3.1 and 5.8 mile laps around the streets of West Lothians largest town.

The men fielded one complete team, Derek Scott, Bruce Hughes, Chris Watson, Alan Inglis, Andrew Gibson and Rory Anderson, whilst Alan Coltman  was the only member of the ‘B’ team and completed the first leg.

For the women, Lauren Corbett was the only entrant and also completed leg one.

Alan Coltman completed his leg in 24:29 and our only female runner Lauren Corbett recorded a time of 23:48.