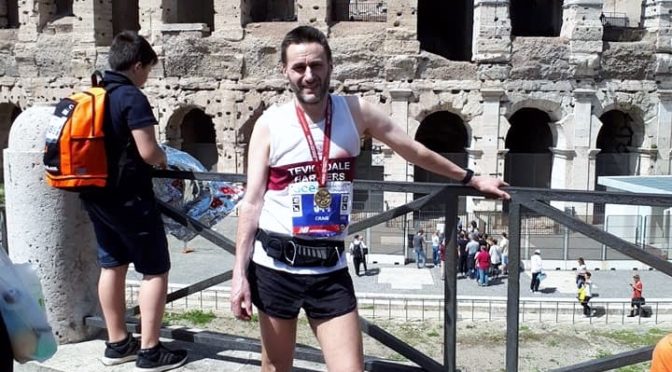 Teviotdale Harriers cast themselves far and wide to find their running fix last weekend, with races in Grangemouth, Braithwaite, Manchester and Rome.

Sammy Walker, Greg Walker, Rory Anderson, Derek McHugh, Kenny Short and Craig Grieve all donned the white and maroon vest and left their marks on a variety of different runs.

Greg and Craig tackled the arduous mental and physical challenge of the Marathon. Rory, Derek and Kenny embarked on a fell race – with all its ups and downs – whilst Sammy was tearing up the Grangemouth tarmac at the East District Championship 10k.

Our three fell running amigos set off for the Lake District on Saturday, to the picturesque village of Braithwaite. This is where you would find the Coledale Horseshoe, an 8.5 mile route with over 3000 ft of climbing.

Out of the 365 runners, Rory was first back for Teviotdale placing 35th in 1:25:36. Kenny followed along in 126th, completing the often treacherous route in 1:39:12. Derek McHugh soon appeared and he finished 284th in 2:02:15 and all three were over the moon with their efforts.

The following day saw Sammy return home victorious in the V60 category at the ‘Round the Houses,’ Grangemouth 10k. The race incorporated the East District Championships and Sammy placed 61st overall in 36:20.

Whilst dad Sammy raced up north, son Greg headed south to tackle his first ever Marathon. The Greater Manchester Marathon would be the scene for Greg to break his 26.2 mile duck. After months of dedicated training, Greg smashed his target of making it onto the Harriers sub-3 hour list and crossed the line in a fabulous 2:40:10. This placed Greg in an impressive 39th position and 8th in the V35 category.

Craig Grieve ventured even further south for his Marathon, all the way to Italy infact, where he ran around the scenic streets of Rome in a time of 3:39:02.

The Mediterranean spring weather was in stark contrast to the climate we currently endure in this country. In fact Craig was amazed at the bright glowing object propped high in the Eternal City sky, the object was locally known as ‘il sole’ or in English – THE SUN.