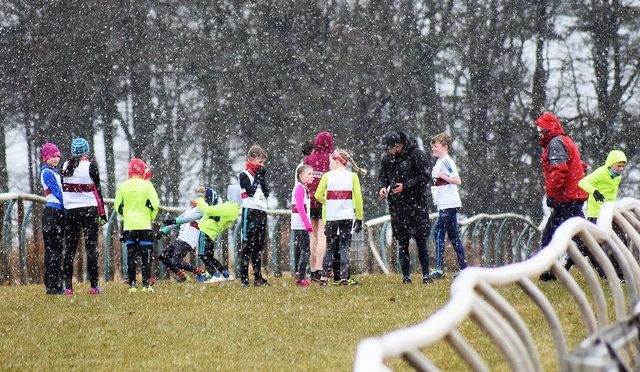 With 10 titles up for grabs in the delayed last race of the season, Hawick’s famous racecourse provided the grand stage, whilst hardy racers full of grit and determination provided the competition.

Originally to be run in early March, this Lyle & Scott supported event fell fowl to the Beast from the East and had to be rescheduled. Although not quite Beast-like, Saturday’s biting winds and sheets of alternating snow/sleet/rain yielded testing conditions.

The Teviotdale Harriers Cup was the first trophy ever to be competed for by the club and since 1894 the race has almost always been held over four laps (three miles) of the Mair.

On Saturday, a gutsy Derek Scott regained the coveted title, one that he had previously won in 2006.

Twelve senior men declared in the handicap with Derek set off near the middle of the pack at seven minutes. Steadily working his way through the field, once ‘Degsy’ gained the lead, there was to be no stopping the determined front runner and he stopped the clock at 27:35, securing victory and recording an actual time of 20:35.

The consistent Alan Inglis and a hard chasing Bruce Hughes offered the nearest challenge but Degsy wasn’t about to butcher his shot at glory and powered to victory.

Up the home straight Bruce managed to pass Alan and claimed the silver, squeezing the latter into bronze. Alan’s endeavour was validated through securing the Glencairn Trophy, the prize for being first over-40 man across the line. Back marker Rory Anderson set the fastest actual time as he completed the four laps in 17:51.

Competing for the Ladies Challenge Trophy were seven Under15/17 Girls and Ladies. Back marker Maisie Ballantyne continued her impressive form, carving through the field over the two lap (1.5 mile) race and romped to victory in an actual time of 10:26.

Lucy Ash, returning to good form herself, offered stubborn resistance to young Maisie but ultimately had to settle for second. Last year’s winner Kirsty Hughes gave everything in her defence of the title but had to settle for third.

Kirsty however crossed the line first female over-40 and claimed the title she craved the most, the Mary Hughes Memorial Salver. The trophy was Kirsty’s idea and was donated to the club only last year by her father-in-law Willie Hughes. Kirsty couldn’t have been happier to take home the gleaming salver bearing her mother-in-law’s name.

The Junior Cup, raced over the same two laps as the Ladies Challenge Trophy, was the prize that awaited the winner of the Under15/17 Boys race. Champion was Andrew Drummond as he scooped his maiden Harriers victory with some aplomb. A highly consistent trainer it was great to see Andrew compete in this club race and take a richly deserved victory. Duncan Little flew around the course in 9:47, the fastest actual time but had to settle for silver.

Enduring the worst of the weather, 15 spirited Under11/13 Boys and Girls were the first to compete on Cup Race day.

The M & M Trophy awaited the winner of the Under11/13 Boys and Charles McKay, who had certainly dressed for the conditions, earned his victory. Getting the pace just right around the one and a half lap race, young Charles secured a five second victory from Glen Jamieson. Glen gamely made his way round the route and deserved his silver, holding off the fast finishing Robbie Welsh by a mere two seconds.

Robbie’s burst to the line also dashed the medal hopes of Alfie Walker. Alfie had given absolutely everything but could not hold on and found himself pushed into fourth. Back marker Conan Harper clocked the fastest actual time of 7:54.

The Under11/13 Girls race finished in handicap order, with Sophie Swan securing the John Elliot Trophy in fine style. Sophie held a strong advantage from start to finish and as hard as Ellie Benstead worked she just couldn’t make up the distance. Ellie should be pleased with her silver though as she held off the determined two time winner Ava Hughes, who claimed bronze. Iona Jamieson (8:18) ran the fastest actual time but her handicap position left her just behind the leaders.

With seven of the days 10 trophies claimed, only the three points trophies remained to be calculated and presented. The points trophies are awarded (unsurprisingly) on a points based system that rewards consistent appearance and effort over an entire season.

Degsy made it a double as he won the Senior Men’s title. Lauren Corbett took home the Senior Ladies title and young Robbie Welsh deservedly headed home with the Junior title.

All of Alex Corbett’s photos can be viewed here