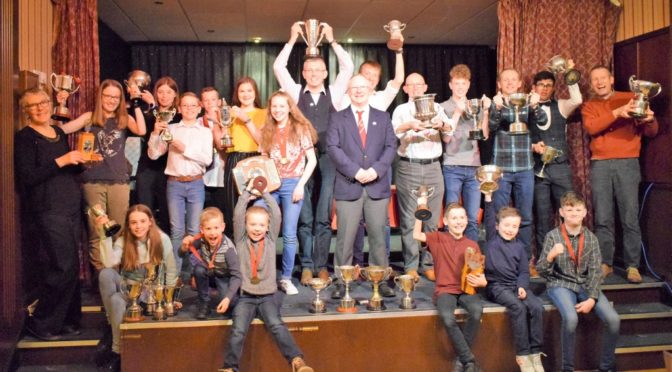 Teviotdale Harriers annual Presentation Night was held at Hawick Burns Club last Friday (9th March) and the 2017-2018 season was celebrated and deliberated, with all runners congratulated.

Taking a slightly different approach from previous years, pictures, film and anecdotes helped tell the tale of another successful season for ‘our Club.’

With the added bonus of the chance to recognise two club stalwarts and thank them for 50 years of dedication to the Harriers, the night proved to be a resounding success.

An impressive 39 trophies and 90 medals all gleamed, twinkled and shined and sat proudly upon a table, ready to be collected by those who had managed to earn them over the last six months. One by one, adults and kids stepped forward and received the recognition and adulation, fully deserved for crossing the line first, second or third.

But running is not always about being in the top three, a huge well done must go to everyone who competed over the course of the last few months. Many first time runners made there Harriers debuts and some experienced runners returned to compete again in a club race.

Gibby appeared with blue hair??? Frank got lost…again, p.b’s were smashed but most importantly, those who did run gave it their all (Ron Hasting’s in the Club Championships immediately springs to mind). Whether they were young or old, effort was etched across every face. Sweat stung every set of eyes. The puggled look was definitely en-vogue for the 2017-2018 season.

The club would like to say a huge thanks for everyone who has contributed in any way towards another successful season. The committee behind the scenes, who always try their best to organise and keep the club moving forwards. The time-keepers, handicappers, photographers, coaches, Pye for the results, the ladies who run the Thursday Think Fitness gym session with Grant. The many sponsors who continue to support what the club are trying to do.

Last but not least…the masses of kids who continue come along and give running a-go no matter the weather and very importantly their parents, who support and encourage to keep them all coming along.