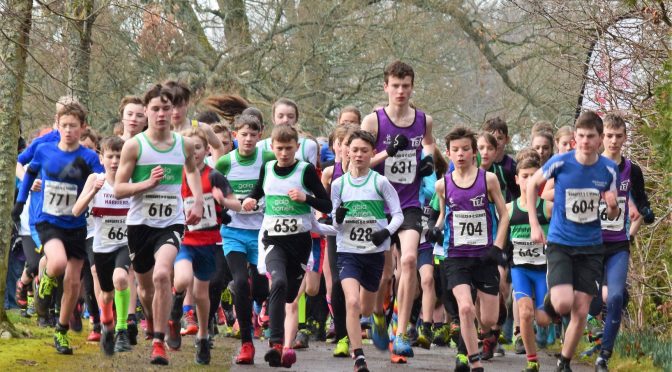 An article called, “Cross Country Running” by Ron Hastings that featured in the March issue of the Denholm & District Newsletter.

The Borders Cross Country Running Series came to Minto hosted by the Golf Club and with a course that thrilled all who took part. The event has been around for about 30 years, and is staged throughout The Borders over the winter months allowing runners to experience the excitement of running Cross-country whilst enjoying the magnificent scenery here not least in our own back yard at Minto. This season saw Teviotdale Harriers bringing the series to the Hawick area for the first time staging their first ever Border Cross Country Race. This season started in the back end of the year with the first in the series staged at Lauder in November and Visiting various locations from Peebles to Paxton and along the beach at Spittal it truly is a pan Borders event. As fate would have it The event at Minto coincided with one of the few days of wintry weather with a cold start and snow flurries greeting the competitors on a wintry Sunday in February. Running is a sport for all ages from the young to the young at heart and first off at the start line near the Club House were 98 youngster aged from 8 years and up who bravely took on the wintery weather and icy hard underfoot conditions to complete a tough course through woodland at Minto Glen with the winner and first home Cameron Fordyce in an impressive 15 mins 38 seconds. Eight junior Teviotdale Harriers took part and young Irvine Welsh was first Teviotdale Harrier home in 18m 23ss placing him 2nd in his 10-11 yrs age category.

lona Jamieson was the fastest Teviotdale girl across the finish, and second in her 12-13 age group in a fantastic time of 19m38s and all deserved a medal for taking part and having a go. Shortly after noon the adult race got underway heading down the track alongside the clubhouse through Minto Glen woods and the Estate around a 6.6 km course, including a challenging long climb to loop around Fatlips Castle. 165 runners finished with Mark Shankey of Hunters Bog Trotters first back in a blistering 25m 35s. First home of the seven Teviotdale Harriers was lain Williams in 29m4ls and first lady runner Caroline Jack in 39m47s.

Post race rest and recuperation was on hand within of the club house where the Steward and club members were on hand to provide revitalising warm drinks, soup and bacon rolls for the runners and the many family and friends that had come along to lend their support. Club President Dr Paul Lockie commented “The event was a huge success and the Harriers are most grateful to Minto Golf Club, Lord Minto, Mr and Mrs Benson and Mr and Mrs Dickson, James Manners, and all the helpers and Marshalls who all gave their support at Minto and while this may be the first time we have raced at Minto we hope that we will be back next year”.