The above event was held on Saturday past in Tollcross Park, Glasgow and saw one of the Teviotdale Harriers returning home with a silver medal.

A small group of harriers made the journey up to Glasgow to take part in this event which included a high number of elite athletes from all over the country. Vests were spotted from clubs as far south as Bideford in Devon and as far north as Forres, there were also athletes from Northern Ireland. As in the Scottish Masters the senior women and 65-plus senior men ran 6,000m metres and the age 35-64 men ran 8,000m. First away were the senior women and 65-plus men on their 3 lap route. There were a number of hills on the route, including one affording a view over towards the city centre, but conditions underfoot were much better than those of late, most likely due to the extremely strong winds which gave the marshalls some extra work to do in re-securing the tape around the course. First finisher for the group of 4 harriers in this race was Alan Samuel in 28:26, position 70th, then Pauline McAdam 28:54, position 76th, next was Donna Inglis 31:37, position 90th and then Jim Pitillo 34:21, position 98th. Alan Inglis was the club’s only runner in the age 35-64 race. He completed his 4 lap route in a time of 31:36, position 82nd.

Jim Pitillo was second finisher in the 80 plus age group and so picked up a silver medal. He is pictured above following presentation of his medal. Well done Jim. 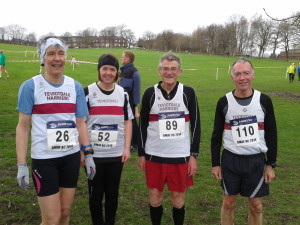