After an absence of 8 years the lure of this year’s British Fell Relays just a couple of hours away at Grasmere proved too strong to resist and after a few enquiries there was sufficient interest for Teviotdale to enter a team for an event which promised to be the toughest for years.

The format for the event consisted of 2 solo legs and 2 paired legs, one of which was a navigation leg. A couple of call-offs later, (Strangely enough both the call-offs were due to run the navigation leg, did they know what lay in store?) our team lined up as follows

The forecast leading up to the event promised quite a decent day with clear conditions but this changed the day before and we arrived at Grasmere to damp conditions with low cloud and despite clearing a bit later on most of the race would be run with limited visibility.

Leg1. Derek got the honour of leading the team off and settled into the pack of 245 runners heading up away from the event field on a route which would take them up by Tongue Gill to the first checkpoint at Grisedale Hause. 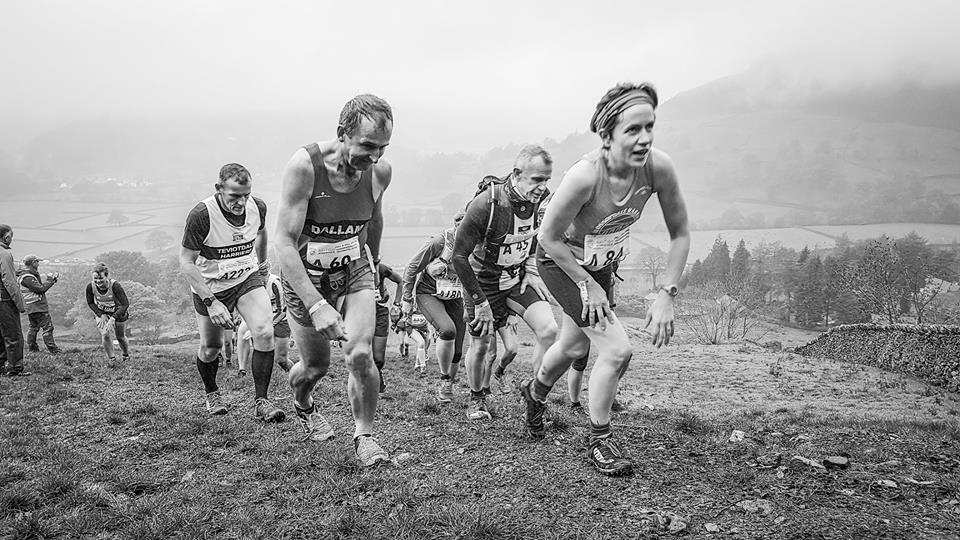 Then followed a steep scramble up to the summit of Seat Sandal and then a long descent of the south-west ridge would drop them back below the cloud before an unkind little climb to rejoin the outbound route and back down to the event field. Derek ran a fine race to get under the tight cut-off time of 75 minutes for the mass start on leg 2 handing over in193rd place having completed his leg in 1:13:17.

Leg 2. Billed as the Queen Stage of the race, leg 2 certainly lived up to expectations turning out to be a belter. After exiting the event field we were straight into a relentless climb, which would eventually top out at the summit of Fairfield 47 minutes later by which time it was decidedly colder and visibility was down to a few yards. Throughout the climb we’d managed to keep a good momentum steadily picking up places, always good for confidence, so we reached the top in good spirits.

From here the fun really started, first with a sketchy descent over Cofa Pike on wet rock with what appeared to be some pretty big drop-offs to concentrate the mind, sometimes it’s best not to see too far. A sharp turn at Deepdale Hause saw us onto a fast if narrow contouring descent above Grisedale Tarn although running into some traffic necessitated an occasional dive off the path to nick some places which usually risked ending up on the deck. Fortunately we avoided coming to grief although one neat piece of overtaking from Kenny almost saw him disappearing into the mist as he left me stuck behind some slower runners. Reunited we raced on to the final checkpoint where the path got a bit rougher again but finding a good line off to the side  we managed to scoot past some more teams before we emerged back below the cloud and soon we were racing towards the welcome site of the event field finishing in a time of 1:22:28 and 93rd on the leg to hand over in 146th place.

Leg 3. The so called Nav leg started ok with an uphill run following a
stream. Sarah and I then made the mistake of following the crowd despite the fact that we didn’t seem to be going in the direction we thought we should but the mist was down and we could see very little. We found ourselves beside water with a group of people who had no idea where they were. Sarah quickly sorted it out and we chose a route – some of them followed us and we took them to a marked crossing point. Unfortunately it wasn’t the crossing point we assumed it was and although we were near the checkpoint we lost some time locating it. After that navigation was straightforward but  as it was the leg was too long, too much climb and all in poor visibility. 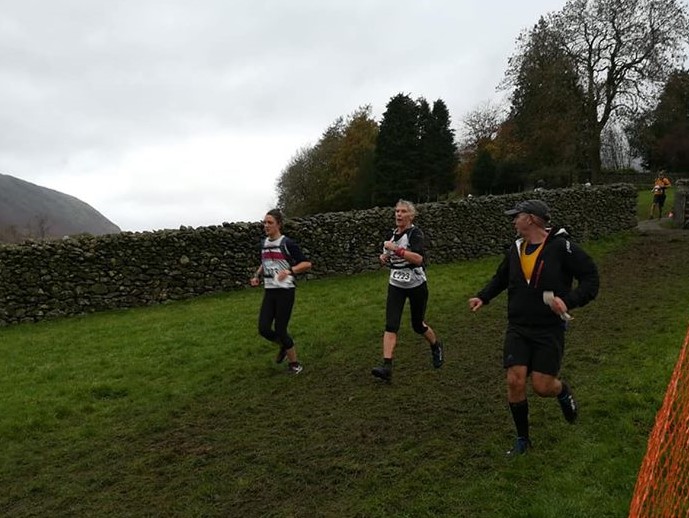 Leg 4. After sterling performances from the rest of the team, it was my turn on leg four. A brief run on a road (supposedly one of the few areas of flat ground in the Lake District) quickly gave way to an ever-increasing, leg-burning incline all the way to the top of Alcock Tarn. The sun had made a brief appearance prior to the start of the race, melting off some of the mist, but there was still a thick covering of cloud from the first checkpoint onwards, all the way to the third checkpoint south of Stone Cove. There were points where I knew I was out on the hills with hundreds of other runners, I just couldn’t see them. I caught occasional glimpses of human-like forms through the mist, heard pounding feet and caught snatches of conversations here and there. This is how horror movies start, right? My only comforts were the small fluttering red flags placed at regular intervals to guide the way and the occasional indifferent sheep. Suddenly, after the third checkpoint, the cloud cleared and then the whole of the Lake District was laid out before me. Any attempt to behold this sublime view was set aside in favour of concentrating on the descent from Stone Arthur. My fellow runners and I alternated between running and sledging our way towards the finish, clearing successive drystane dykes with grim determination, having sold ourselves completely to gravity. A muddy path took us all the way to the finish line and the final checkpoint. What a fantastic day – here’s to next year! 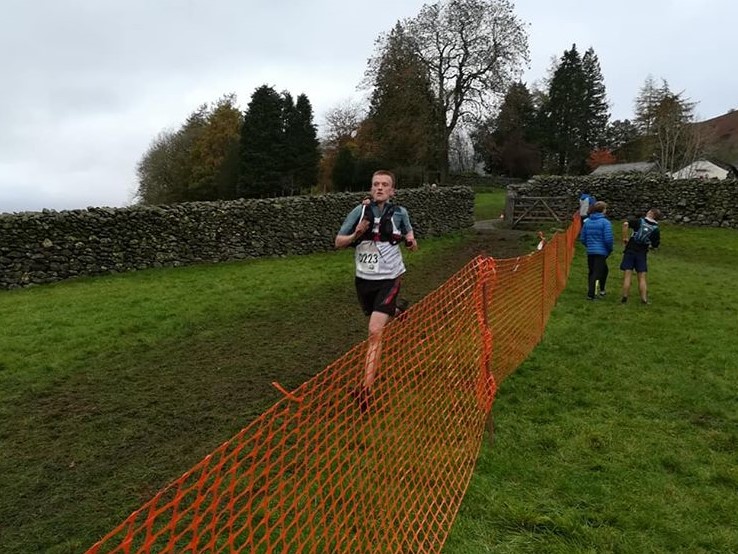