Greg Walker Reports from a scorching 5k/10k/Fun Run. In the 1989 blockbuster movie, Kevin Costner’s character, Ray Kinsella, hears a voice whispering ‘if you build it, they will come’ as he walks through his Iowa cornfield and he is inspired to create a baseball diamond on his farm in the hope that people will come to watch ballgames there. It was with similar hope that Teviotdale Harriers set about creating their own ‘field of dreams’ as they prepared the 10k and 5k courses for their annual races last Sunday. The runners did come but not in great numbers, with only 52 competitors across the 10k and 5k races. The kids, however, bucked the trend with a great turnout in the ever popular Fun Run. For those who braved the searing late summer sun, they were treated to a great morning’s running around the resplendent Wilton Lodge Park and what the event lacked in quantity was more than made up for in the quality of individual performances, especially amongst the juniors.

The Fun Run was the first event of the day as 65 excited youngsters and parents set off on the 2 mile route from the park gates round ‘the Dunk’ and finishing at the Haugh. The race was led from start to finish by 12 year old Innes Wright from Team East Lothian Athletics Club, with an impressive performance, crossing the line in 12 minutes 13 seconds. Innes was followed home in second place by his younger sister Cerys Wright with an equally impressive display, picking up the trophy for first girl in a time of 13 minutes 54 seconds. Local lads Taylor and Craig Watson picked up the trophies for second and third in the boys’ race representing the host club, and in the highly competitive girls’ race Kirsty Rankine (Gala) and Ellie Benstead of Hawick picked up trophies for second and third, both finishing in the top 5 in the race overall.

Next up was the 10k and 5k which both started on the same start line, near the park gates, with a single blast of Barty Yule’s starting pistol. With the blazing midday sun pushing the mercury over 30 degrees celsius, 52 hardy runners set off down the avenue, past the Museum, to the bottom of the ‘10k hill’; naturally the 10k runners went up the hill but for the first time the annual 5k race stayed in the park on a new route. The 5k runners did a large and small lap of the park before crossing the Langlands bridge and running down ‘the Spetch’, following the river back to the Haugh. Although not yet an official 5k ParkRun course this must be one of the most scenic park runs in the UK.

At the sharp end of the 5k race, it was the junior runners who dominated proceedings with the first three in the men’s race all under 16. Angus Wright of Team East Lothian AC followed up his brother and sister’s performances in the Fun Run by finishing first in the race with a strong run and a record on the new course of 17 minutes 21 seconds. Second and third in the men’s race respectively were Conan Harper and Robbie Welsh of Teviotdale Harriers. Third in the race overall was Gregor Collins of Gala Harriers who was awarded the first under 16 boy prize. In the ladies 5k race, the ‘evergreen’ Sara Green of Gala Harriers came home first in a time of 19 minutes and 19 seconds, she was followed closely home by talented youngster Iona Jamieson of Teviotdale Harriers in second and Amy Kinnings-Smith in third. Maisie Ballantyne of Teviotdale was the winner of the under 16 girls’ prize.

In the main race of the day, the 10k runners battled the sweltering conditions for two laps of the Martin’s Bridge circuit. Despite the heat, Edinburgh AC athlete Callum Reid was making it look very easy as he completed the first lap, holding a commanding lead over Ryan Milligan of Teviotdale Harriers who tried in vain to stay on his tail. In the end the conditions got the better of the Teviotdale runner and Callum extended his advantage on the second lap to win in a time of 32 minutes 45 seconds, a very respectable time in conditions not suited to fast running. This was Callum’s third victory in the event, over a course which he clearly enjoys. Ryan Milligan held on to take the silver, with Cameron Bullen of Team East Lothian in 3rd. The prize for first male in the Master’s category went to David Wright of Hunters Bog Trotters. In the Women’s race, Megan Wright capped an excellent day for the Wright family from East Lothian by coming home in first place in a time of 42 minutes 59 seconds. Second in the Women’s race was Hawick exile Sandra Edwards, representing the Rothwell Harriers Athletics Club of Leeds. Finishing in third place, with a great run, was Claire Douglas-Hogg of the mighty Teviot Trekkers. Caroline Jack was second woman home in the race but was awarded the higher prize of first female in the Master’s category.

After racing, runners retired to the Old Parish Church Hall for home baking and a not so much needed hot drink. Trophies were presented to the first three boys and girls in the Fun Run. Cash prizes were awarded for the 10k and 5k, along with spot prizes for the lucky runners in those races.

Teviotdale Harriers would like to thank the race sponsors, including Sandi Spence from Eden, J A Waters Butchers, Selkirk, and Skin Deep Therapeutic Massage for donating vouchers. Also, a huge thanks to Think Fitness for donating the much needed water for the finish area. 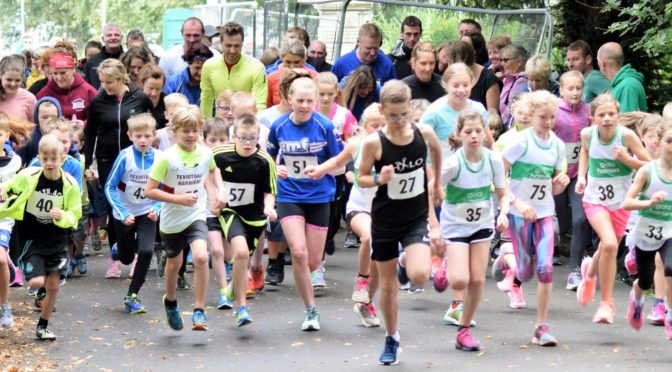 Record numbers descended on Hawick last Sunday as Teviotdale Harriers staged their annual 10k, 5k and Fun Run and it turned out to be a ‘Gala‘ day. END_OF_DOCUMENT_TOKEN_TO_BE_REPLACED

“a flat course in the Scottish Borders with PB potential …” 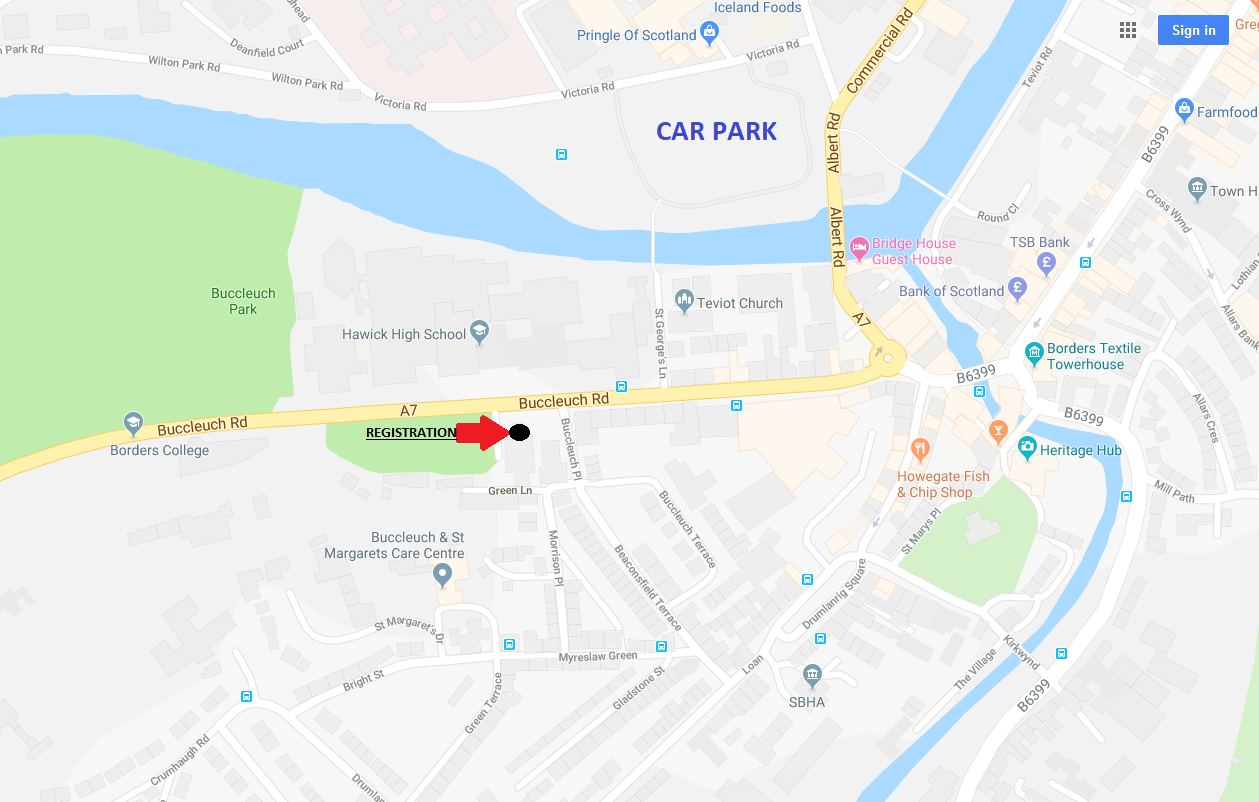 Fun Run £2 enter on the day only

and fun run runners under 16 years but old enough to run ! (and under 6 years of age must be accompanied by a responsible person around the course )

Closing Date for 10k & 5k 25th August -or until all places are taken. If places are still available on the day entries may be made for an additional £2

Fun Run – winners trophy for 1st Boy and 1st Girl and sweets for 1st 2nd and 3rd boy and girl.

and some spot prizes for 10k and 5 k finishers

Entries for Fun Run and 10k/5k can be also be made on the day. 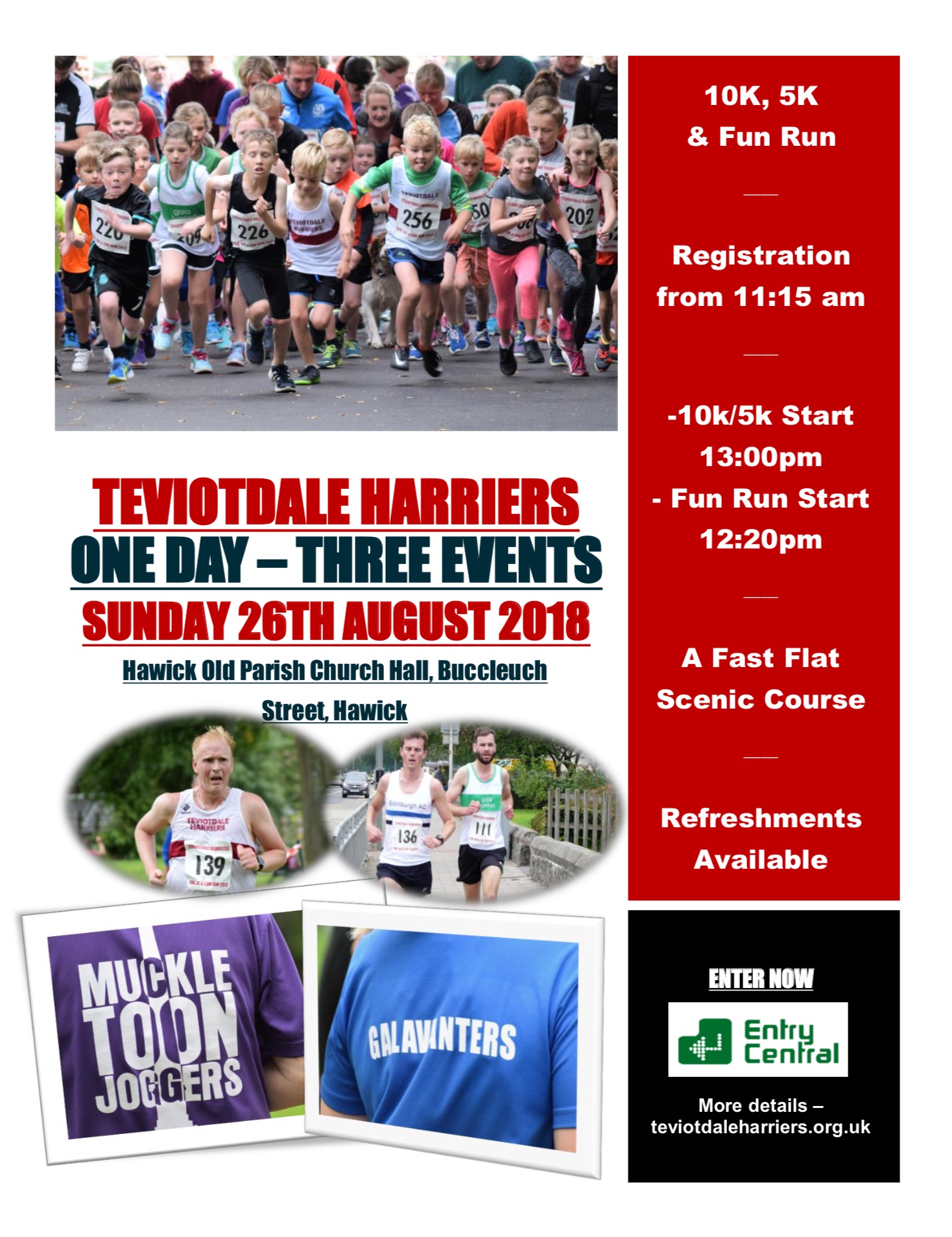