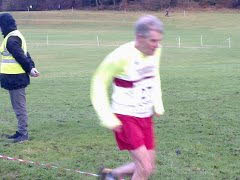 Saturday the 30th of January saw 3 Harriers make the journey up to Forres for the Scottish National Masters Cross Country Championships.

Travel to this part of the country in January is always unpredictable and sure enough the forecast was for heavy snow.

Setting off from Hawick Mid Friday all was well until gaining height at Drumochter Pass brought the first snows of the journey. The roads were clear to the overnight stay in Aviemore for President Coltman.

Waking next morning had brought several inches of snow made worse by additional high winds.The breakfast in the hotel was packed with skiers disappointed the 100 mph winds had closed the nearby Cairngorm Ski Centre.

A quick check on the SAL web site showed the races were ON. The car journey to Inverness was ‘interesting’ with a lorry and a car both off the A9 due to the compact snow. However on reaching the Capital of the Highlands the countryside turned Green and all the way to Forres.

Jim Pittillo and Pauline McAdam were first up in the 6000m Ladies and Men Over 65 race.Both put in a great effort with Jim once again getting 2nd place and a Silver Medal in the Over 80 Category.It is great that in this age group there were a total of 4 runners. Well done to you all.

The second race was for Male runners under 65. This was over 8000m and like the previous race it was snow free and good underfoot conditions. However the cold biting wind from the sea had competitors well wrapped up.

After the race, teas and hot foods were provided and well received in the Town Hall. This was also the location for Jim to receive his well deserved Silver Medal.

Report and photographs by Alan Coltman.