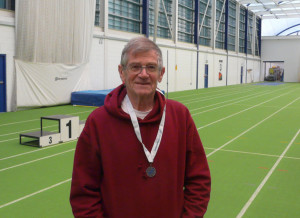 Teviotdale Harriers old timers undertook the arduous cross country journey to Kilmarnock to compete in the Scottish Masters Cross Country Championships. The Masters is grass roots sport at its most enthusiastic, with the only pace-makers those implanted in the chests of the occasional die-hard enthusiast. The club had an excellent turnout of ten runners ably supported by seven travelling spectators. There can be few clubs that boasted runners born in the 30s, 40s, 50s, 60s and 70s. The event is for athletes over forty with the over sixty five men running with the ladies. The attraction of master’s athletics is rebirth every five years, as you qualify for a new age group keeping you forever young.
The course had everything – a hill, a river, snow, mud, ice, sand, water and gravel making it an excellent varied course. Runners came from as far afield as Aberdeen and Highland Hill Runners to descend on the Ayrshire town. The sun shone for most of the day in stark contrast to the conditions at the Masters last year in Hawick described by Road Running and Cross Country secretary Alex Jackson as the ‘worst conditions I’ve ever known for a cross country’ as sub-zero wind-chill caused deep distress for many athletes in the Borders.
Ladies and older men run first over 6,000m and then the younger men go next over 8,000m. 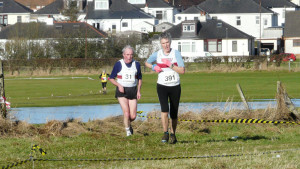 Jim Pittillo M80 was next finisher and 22nd man. Jim was second overall in the M80 category and collected the silver medal on the podium at the prize giving. Phyllis O’Brien, Hunters Bog Trotters climbed to the top of the podium to collect the F55 gold medal after being unable to do so last year when she spent the night in hospital after the race suffering from hypothermia in those appalling conditions at Hawick. 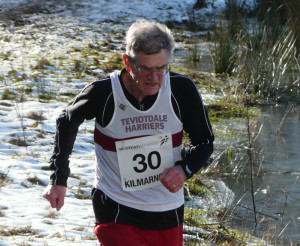