GOLD MEDAL FOR JIM AT THE MASTERS 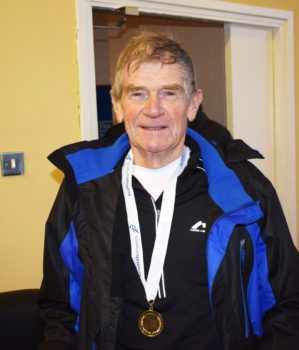 Saturday 28th January saw the Teviotdale Harriers head north to Dundee to compete in the Scottish Masters Cross Country Championships. The ten men and one woman squad with a combined age of over 550 years, along with a hearty bunch of spectators left a cold and misty Hawick early on Saturday morning to make their way to their venue at Camperdown Park, Dundee.

There are two races run on the day, the first being the combined race of Women over 40 and Men over 65 on a 2 lap, 6,000 metre course. Teviotdale had 3 runners in this event. Donna Inglis F50+ category, Frank Birch M70+ category and previous silver medalist at both the Scottish and British Masters Cross Country Championships, Jim Pittillo in the M80+ category. 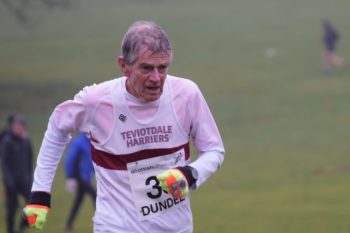 Running in damp, misty, drizzly conditions, first home was Donna Inglis in a time of 36.04. Next was Jim Pittillo in a time of 38.18, well ahead of the competition to take not a silver medal this time, but the gold medal, much to the delight of all the team. Frank Birch on his first outing to the Masters, completed in 38.57. Well Done Jim!

Dry clothes on, tent and banner taken down and packed away, all headed to the Ardler Centre for the presentation of medals. A loud cheer went up when Jim received his well earned gold medal. Celebrations began on the minibus home with various delights being shared out, then continued with a visit to Wetherspoons, Hawick for tea and some refreshments. 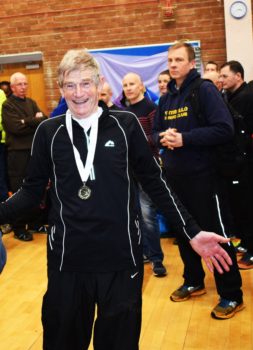