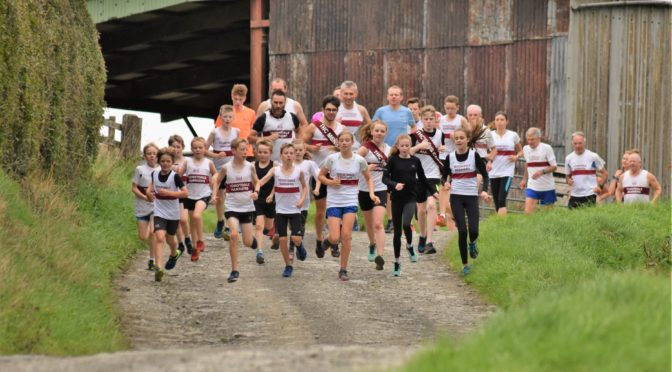 On Saturday the opening run and naming of four new Club Captains formally signalled the start of the 2018-19 season for the Harriers.
With a big turnout of members, especially juniors, Rory Anderson, Ishbel Inglis, Callum Renwick and Maisie Ballantyne donned the re-introduced Captains Sashes and led runners of all ages on the traditional ‘opening run.’

After the customary photo, men’s captain Rory and ladies captain Ishbel, flanked by junior boy’s captain Calum and junior girls captain Maisie, set off, followed by 40 or so members over the captains’ choice of running route.

Once the run was complete, a sizeable number of members, friends and families reconvened at the Cricket Club for the presentation of the ‘Captains Badges.’

A fun but competitive game of rounders was enjoyed as kids and big-kids basked in the evening sun. A high-spirited game of football followed with new boys’ and girls’ captains Calum and Maisie playing prominent roles. The match finished an honourable one each before tired and thirsty Harriers completed the night in the cricket club with some taking part in a plank competition, which was won by young James Wood (nearly 4 minutes!!!).