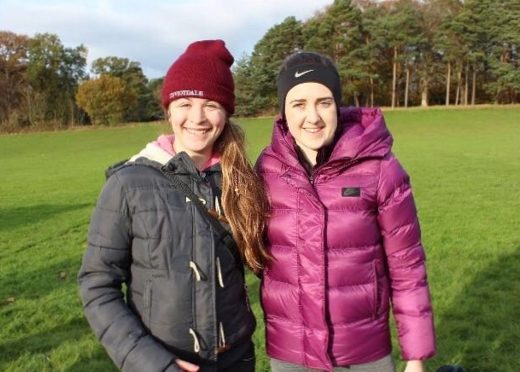 This year’s Lindsays scottishathletics NATIONAL SHORT COURSE XC CHAMPIONSHIPS saw fast and furious racing, hundreds of spectators and an Olympian. It was a crisp November day and the winter sun was shining on all in Kirkcaldy making it perfect conditions for a XC.

This event had a great venue, weather and course  – which made the racing exciting for competitors and spectators alike. Harriers Thomas MacAskill, Fraser Clyne, Alister Biggar and Eilidh, Helene and Raymond Jaffray ran around the course in Dunnikier Park.

First up from the Harriers was Thomas in the u15 boys race which consisted of one full lap around the park (2000m). He was the first to tackle the challenging uphill start at great speed from the gun. Thomas finished in a time 7:41 in 81st place.

Next was u17 women’s race made up of one short loop and one full loop (3000m). Eilidh finished in 26th place with a time of 11:52. Then it was Fraser over the same 3k course in a very competitive field. He crossed the line in a time of 9:55 putting him in 33rd place.

After that was the women’s race which included the super speedy Laura Muir and our own Helene Jaffray. Spectators lined the course as Laura showed her Muir magic in retaining her short course championship title for the fourth time in five years. Helene finished her two laps in a time of 18:26 making her 6th in her age group and 130th overall.

The last race of the day was the junior/senior men’s race with Raymond and Alister. This race saw a record number of 411 finishers. Both showed improvement from XCs in the last few weeks. There was a lack of photos of Raymond as Katie the photographer was too busy chasing after Laura Muir for a photo.

Overall it was a great, fast course and a very well organised event. After a great day it was back over the new Queensferry crossing (which slightly resembles a yacht) ready for the Burns Club races back in Hawick next weekend.

Pictures thanks to Katie Jaffray