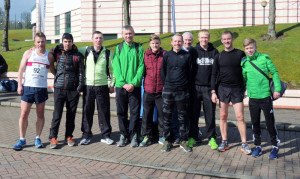 The National 6 and 4 Stage Road Relay Championships were held on Sunday and a hoard of Harriers made their way north to Livingston.

With three officials, two teams and plenty of noisy supporters, the club were well represented in every way possible for this increasingly popular event.

St Margaret’s Academy was the base and starting point for a record number of entrants to race their way around the streets of West Lothian’s largest town, in search of both men’s and women’s National Titles.

With clubs needing to field teams of six, for the men’s race and 4 for the women’s, Teviotdale selected 12 capable Harriers and sent them forward to compete against some of Scotland’s top runners. Unfortunately a women’s team could not be fielded (whisper it quietly though…maybe next year!!!).

The format of the race requires teams to run distances of 3.1 and 5.8 miles alternately. Six laps for men and four for women.

Lining up for the first short leg were Andy Goodair (18:38) for Teviotdale ‘A’ and Kyle Potts for Teviotdale ‘B’ (19:43). Both clearly gave their all and worked hard to the line where the Harriers next two runner’s prowled like caged animals ready to be let loose. Andy’s endeavour gave him the fastest short leg time by a Harrier on the day.

Both the ‘A’ teams Rory Anderson (34:14) and ‘B’ teams Ryan Law (38:07) set off at a blistering pace obviously intent on catching a few in front of them. Both looked shattered as they turned the corner for the last few hundred yards of their long lap. Credit to the pair though as they fought right to the line to finish their leg.

Derek ‘Degsy’ Scott (20:18) took up the hypothetical baton from Rory and tried every inch of his 3.1 mile stage. Alex ‘Coach’ Corbett (20:54) gave his customary everything after young Ryan’s efforts.

Greg Walker (33:32) was nominated 4th leg runner for the ‘A’ team and kept up his ongoing good form by recording the fastest long leg run by a Harrier. Andrew Gibson (41:50) making his comeback to the Harriers vest, ventured off at a steady pace and resolutely stayed the course.

Leg number five for the ‘A’ team was in the safe hands of consistent runner Alan Inglis (19:46). Alan pushed himself right to the line whilst Scott Watson (20:22) done likewise for the second competing Harriers team. Scott, who lined up for Teviotdale in this event in 2003, completed the last of the short legs and the final runners were cut loose.

Well done everyone who played their part in this hugely successful day.

A special mention must go to our neighbours Gala Harriers as their Women’s Masters Team secured a 4th straight title. Well done ladies.