The wintery feel of Sunday’s weather didn’t stop 400 runners heading to Lauder for the opening race in the Borders Cross Country Series.

With both a senior and junior race to contest, Teviotdale Harriers were well represented on a day that offered, wind, rain, mud, slips and trips around a testing but enjoyable cross country route.

Rory Anderson thrived in the conditions and finished a fabulous fourth.  Edinburgh University Student Alexander Chepelin won in 25:30, with Andy Fallas from Carnethy Club second and Tom Martyn of the Hunter Bog Trotters settling for third.

Setting off at the same time as the 162 men, 99 ladies tackled the same challenging route.  Kirsty Hughes was our sole female representative and the enthusiastic competitor enjoyed her run and finished a hard earned 61st (43:23).

Two juniors also proudly paraded the Harriers vest among the other 124 youth runners at Lauder, with both giving a great account of themselves on a day that was certainly for the hardy. 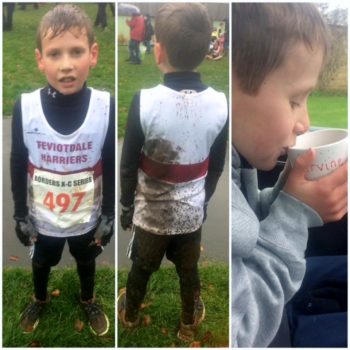 Fraser Clyne and Irvine Welsh made it nine out of nine for runners who had competed the day previous and both showed no ill effects from the rigours of the Mair.  Fraser ran doggedly and finished a credible 6th (12:01) behind winner Yousuf Khursheed (11:33) from Gala Harriers, with Chirnside’s Oscar Onley second and Fraser Kelly of East Lothian third.

Nine year old pocket rocket Irvine, after a suffering a few slips on the sodden course, will be pleased with his 57th place finish (15:13) amongst runners aged up to 17.  Irvine actually finished 2nd for the 8-9 age category.

The next date on the Borders Cross Country Series calendar is Sunday, November 20th when competitors will head to Galashiels.