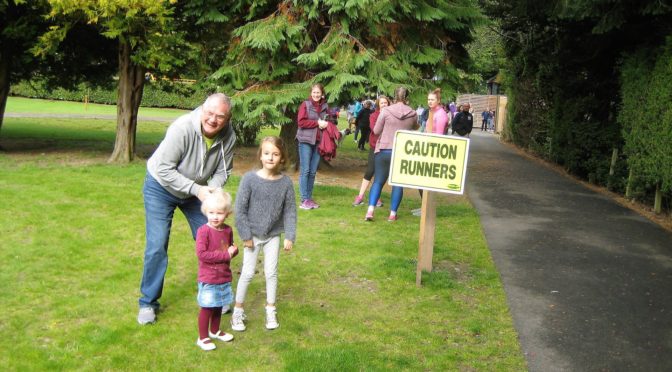 The shortest of all the club races got the new season off to a flyer as participation numbers continue to flourish.

With five titles up for grabs, Derek McHugh, Abbie McGaughey, Calum Renwick, James Wood and Ava Hughes all earned the plaudits and etched their names in Harriers history.

With only 1 minute 13 seconds separating the entire 15-man field, the handicappers gave the large crowd of supporters an exciting contest as the senior men raced around the 3000m Christie Cup route.

And it was a case of 16th time lucky for winner Derek McHugh as he finally and deservedly raced home in 12 minutes 12 seconds to win his first ever Harriers race.

Brian Harper (11:58) finished second and certainly gave his all. Making steady progress around the course, Brian picked off the front markers one-by-one but couldn’t quite make up the 25 second handicap between himself and Derek.

For third place finisher Derek Clyne it was a similar story. Derek (11:50) followed hard on the heels of Brian as they weaved their way through the field. Although halving the gap, Derek ultimately had to settle for third. Back marker Greg Walker produced the fastest actual time of the day, stopping the clock at 9 minutes 55 seconds.

The senior ladies and under 15/17 girls took to their marks, racing alongside the under 15/17 boys with a total of 24 runners on the start line for two lap’s of running.

The largest ladies and girls field seen for many a year saw Abbie McGaughey cross the line first, also winning her first ever club race and with it claiming the D. Scott Shield.

Abbie (7:56) ran a gutsy race as friend turned foe Sinead McHugh (8:03) tried to cut her lead. Sinead couldn’t quite make the difference and settled for silver whilst Kelly McKay made her own attempts to rise up the rankings. Kelly (7:37) took third with Eilidh Jaffray (6:10) running the fastest actual time.

The under 15/17 boys raced for the Refuge Assurance Trophy and boy’s captain Calum Renwick (6:35), who is already enjoying a season to remember, romped home in fine style. For much of the race it was a Renwick one-two as Calum’s twin brother Lewis provided the stiffest challenge.

Lewis (7:00) finally succumbed as the race sped past the bandstand before heading down the long home straight to the finish at the New Café. At this point Lewis had emptied the tank and the fast finishing Conan Harper (6:00) had the speed to burst past and claim second, leaving Lewis in third. Racing from the back of the field, Fraser Clyne (5:23) had the fastest actual time.

The fast and furious sight of 24 kids competing in the under 11/13 age groups over the one lap 897m route was the first race of the day.

With both boy’s and girl’s titles up for grabs, James Wood and Ava Hughes proved worthy winners. James (3:28) led home the boys to scoop the Hawick News Trophy but only just. Just 15 seconds separated the first eight battling boys as Charles McKay (3:17) raced right to the line for second and Greg Watson had to fight for third as Robert Wood, Irvine Welsh and Robbie Jack all closed in. Irvine (3:05) ran the fastest actual boys time.

For her efforts, Ava Hughes claimed the John Hogg Memorial Trophy. Ava (3:15) ran a controlled, composed race and strode to the line seven seconds ahead of second place Lucy Allott. Lucy knew the race for second was on as Iona Jamieson flew around the final quarter of the route. Young Lucy (3:37) didn’t panic and finished of a fine run with silver. Fastest girl on the day Iona (3:12) had to settle for bronze, whilst Erin Clarkson (3:42) and Emily Hush (4:14) also gave a fine account of themselves.

The next event on the Harriers calendar is the 8k Penchrise Pen race and 5k trail race on Sunday 30th September, with registration at Stobs Camp from 11am.