Irvine Welsh, Derek McHugh and Rory Anderson headed over the Border to the 151st Alwinton Show. Nestled deeply amidst the scenic Northumberland National Park, the annual sheep show, terrier racing, Cumberland wrestling and hound trails had all locals geared up for an exciting day.

However, it was the fiery quick 3 mile Fell Race that the three boys from Hawick were there to compete in.

Leaving early Saturday morning, Derek (due to a knee injury) was designated chauffeur but this proved not to be the end of his jobs for the day. He assumed many important roles, ranging from kit man, binocular and position finder to cheese and tomato sandwich making machine and paramedic/first aider.

Arriving at the venue Rory broke the news to young Irvine that this indeed was a country show and that dogs of all kinds would be there in their thousands. Irvine who doesn’t see eye-to-eye with this particular species of animal, initially showed slight weakness but soon ‘puffed the chest out’ when it was mentioned that all the people in his race were from South of the Border, so ignore the dogs and run hard.

At registration the Hawick trio met the familiar face of Gerald Paxton, the starter from the summer games circuit, carrying out all the pre-race requirements. With Alwinton village situated just over the hill from Otterburn Military Training Camp, it was to be Gerald who dropped the Kids Fell Race bombshell. Young 10 year old Irvine would be completing the full 3 mile unrelenting Fell race, the same distance the senior race would attack later on that day.

Competing in the 13 & under age group, Irvine stepped up to the start line at 1pm sharp with his fellow competitors which included the older age group of 16 & under. The kids were released like a pack of hounds on the pleasant sound of the hooter and headed along the River Coquet to the ever closing hill (better described as Everest for these young kids). 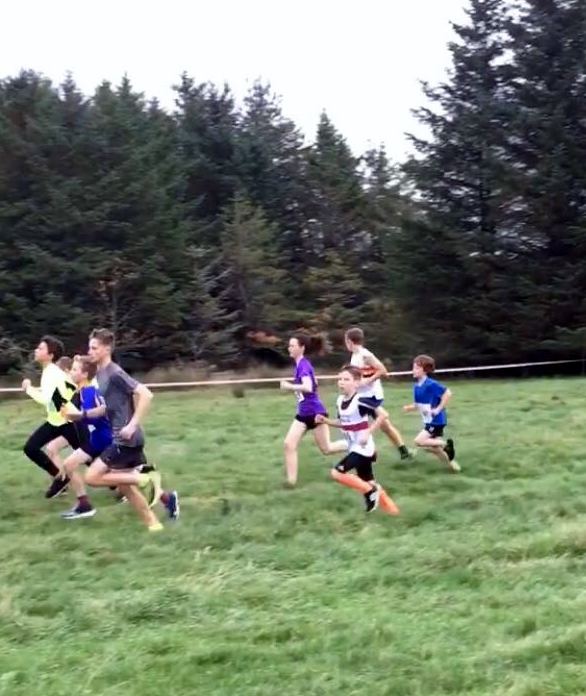 The second youngest of Clan Welsh made his way from 26th place to 19th place on the gruelling climb, picking off the over keen Usain Bolts of the fell running world. Holding his position Irvine who was contesting is his first hill race attempted the steep bracken descent in several fashions. Running, jumping, sliding, both on his worn out trainers and le derrière, and the odd graceful fall but soon picked himself up and sped into the finish line to the waiting Teviotdale Harrier chauffeur, Derek.

Once the exertion of the Fell race had passed, Irvine couldn’t take the smile off his face, he has promised that attending next year was a must and to beat his highly commendable position of 19th this year was his target. Warm clothes were thrown on quickly as it was time to cheer/laugh at the returning Rory Anderson from his 2 month break.

The start time of the senior race was 1.45pm, the group of over 50 runners were all eager to go, all fighting for the best start positions. Rory on the other hand was talking to himself at the back repeating the phrase; “you’ve no run for ages, don’t go off like an eejit.”

The second use of the hooter at Alwinton show and the race was all go. Surprisingly Rory listened for a change and acknowledged his fellow Harriers on the way towards the climb. Anderson like Welsh settled in the middle of the pack around 20th before working his way through to 6th before the start of the climb. The ascent was very much single track and no passing places were available, unless your name was Mr Welsh, Anderson used this tactic to his advantage and held his position. Running along the ridge the brick layers had been busy that morning and Rory ‘hit the wall’ with one runner getting past, leaving him in 7th place. He held onto this and finished in a respectable 19 mins 54 seconds.

After the races the Harriers tasted the local delicacy, had a look round the stands and then headed home with the great achviement of completing the Alwinton Show Fell Race. A definite one for the 2018 calendar.