Teviotdale Harriers were the toast of the Dramathon last weekend, returning with victories, unique medals, memories and whisky aplenty. 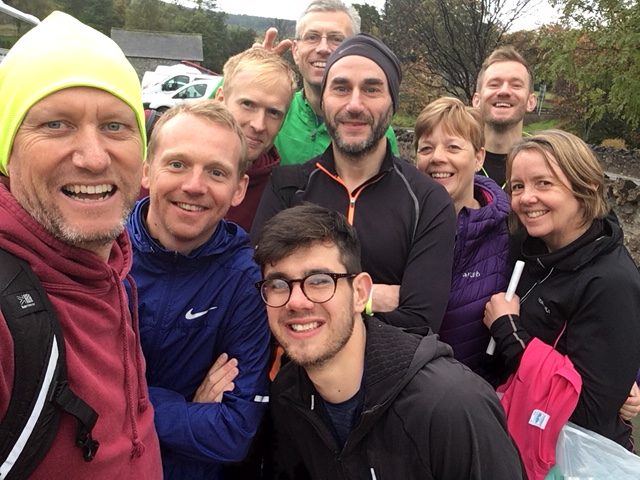 A mini bus full of giddy runners made the long journey north to Dufftown, deep in the heart of Scotch Whisky, to take part in a race with a difference. The Dramathon, organised by Durty Events, was a brand new idea that offered four races around one course.

Rory Anderson, Bruce Hughes, Derek Scott and Greg Walker entered the relay. Paul Lockie and Frank Birch declared for the half-marathon, whilst Alan and Donna Inglis along with Craig and Sylvia Grieve chose to tackle the 10k.

The ten from Teviotdale signed up in January and were lucky to get into this hugely popular event which sold out in no time. Due to traveling distances it was decided to make a weekend of it and they booked a two night stay in chalets on the banks of the utterly stunning Loch Insh.

The late Friday arrival (that late the bar was shut!!!) coupled with an early Saturday start could not dampen the nervous but enthusiastic runners who made the journey up the A9 into something of the unknown.

Dramathon HQ was the Glenfiddich distillery. Upon arrival and stepping off the bus, the first thing that struck was an aroma that packed a peaty punch, that unmistakable whisky scent followed you at every turn.

The way that the event would work required military style preparation and the organisers skilfully managed to carry it off but between legs one and two…only just. Rory Anderson was whisked by bus to the 10am start at Glenfarclas, along with 54 other leg-one and 208 marathon runners.

During the first section, Rory would have witnessed spectacular views of Ben Rinnes before discovering the elegant Ballindalloch Castle. That would’ve been the case…but in typical Anderson fashion, Rory ran head down as hard as he could.

As Rory raced, Bruce Hughes climbed aboard a bus that would take him to Ballindalloch, the start of leg-two. No sooner had the bus arrived though, so had Rory. Bruce only had time to disembark and disrobe his tracksuit as Rory sped around the corner in first place shouting; “go, go, go,” in his indomitable style.

Bruce took responsibility of the ‘dibber’ (the timing chip used as a metaphorical relay baton) from Rory and was hastily away. The second section followed predominantly along the banks of the Spey and Bruce added to the already sizeable lead.

Whilst the second section was being run, Derek Scott boarded one of the next fleet of buses that transported all leg-three runners, alongside the 157 half-marathon competitors to their start point at Tamdhu.

Paul Lockie and Frank Birch were among the field for the half and their race began at 11am. The route would follow the second portion of the marathon, firstly heading to Aberlour before passing through Balvenie and racing to the finish at Glenfiddich.

Paul and Frank were let loose and soon after, Bruce quickened up the final 200m of leg-two shouting on teammate Derek who was wistfully warming up. Derek dumped his maroon top and Bruce executed the dibber exchange with the Harriers enjoying an 11 minute cushion.

Again whilst runners were out on route, buses were busily being filled with leg-four and 10k runners, ready to embark on the journey to Aberlour which would be the start point of the fourth and final section.

Alan and Donna Inglis, along with Craig and Sylvia Grieve stood among the 110 runners who were under starters orders at 12pm to take on 10k course. Meanwhile Derek gave it his all and added to the teams lead before Greg took control of the dibber with only a hard run between him and certain relay victory. 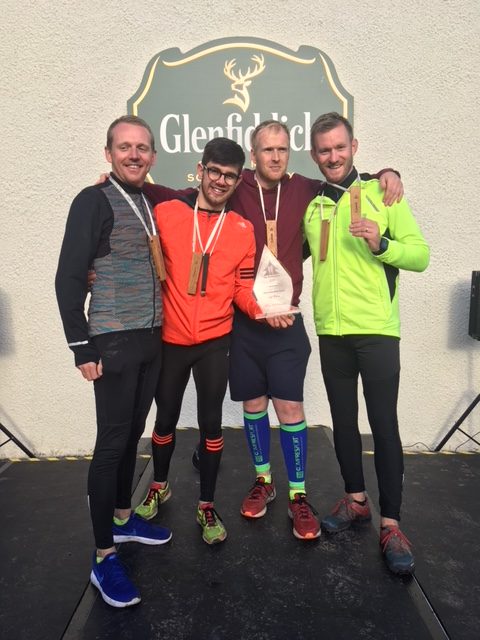 With the tired relay team congratulating each other, double joy soon rounded the corner as the leaders of the 10k made their way up the finishing straight. Hawick’s own Craig Grieve (45:01) led the way with teammate Alan Inglis (45:50) not far behind, claiming a thrilling one-two. 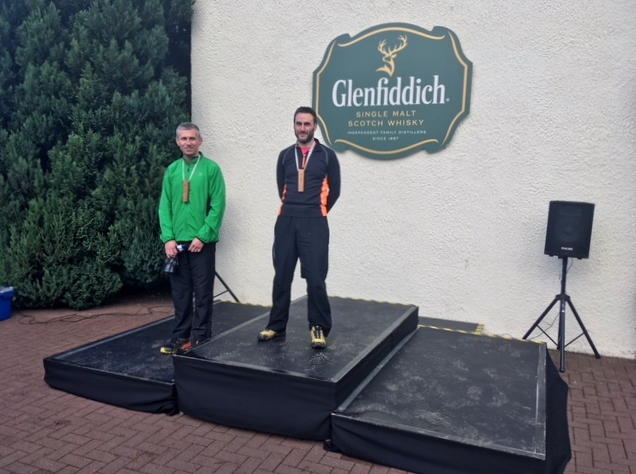 Simon Beckett (46:06) had at different stages provided a stiff test for both Craig and then Alan but the stamina of the experienced Harriers proved to be to strong and Simon had to settle for third.

Both Donna Inglis (1:02:15) and Sylvia Grieve (1:13:55) showed great determination within the final few steps of their runs and produced a Mo Farah esque kick, to climb up the 10k pecking order. Donna’s efforts left her fourth in her category and Sylvia placed ninth in her group.

Our half marathoners, Paul Lockie (2:02:45) and Frank Birch (2:10:18) placed 16th and 26th respectively in the Men’s Senior Vets category. Paul’s facial expression fluctuated between a grimace and a grin as he dug-in up the slight rise to the line. Frank also rallied for a final burst but popular opinion is that he saved most of his energy for dancing at the nightclub later that evening. 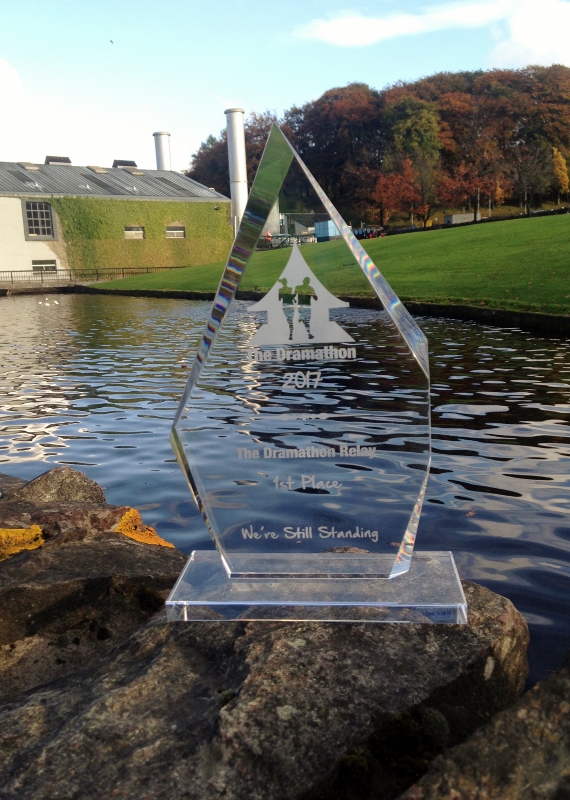 The whisky laden goodie bags were gratefully accepted and the podium presentation under the famous Glenfiddich sign made for an impressive end to a hugely successful days racing for the Harriers.

All that remained was for the tired but thirsty runners to enjoy the local hospitality of Aviemore and in particular the Cairngorm Hotel, where the resident singer enjoyed the accompaniment of 10 enthusiastic backing singers.

Link to some more photos, Franks dancing and a wee bit singing here