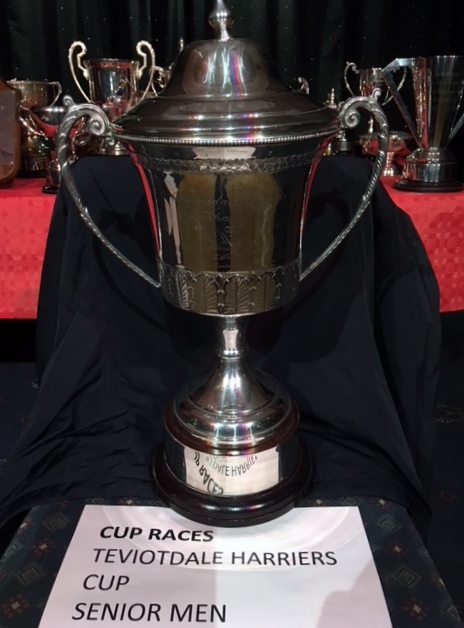 At the 1893 AGM, R. Bowie suggested that a cup should be introduced for a 3 mile race. Patrons of the club agreed and commissioned  F. E. Rutheford, jeweller,  to design and supply the magnificent Cup.

The inaugural race was to have been held on 31st March but this was postponed until 7th April, due to a clash with the Gala v Hawick rugby match! James Ferguson emerged the  first ever winner.

Cup race records show that the event was switched from the racecourse to a cross country course in 1898, why remains a mystery. The next year was to be held back at the Moor but due to a snowstorm it was cancelled and run on the following Monday around the ‘cinder path‘ at Wilton Lodge.

The 1900 Cup Race was also held in Wilton Lodge Park, this time on a Tuesday night.

The 1947 Cup Race was postponed due to deep snow and rescheduled for the Tuesday evening, 1st April and run over a three mile course in Wilton Lodge Park.

The original Cup was retired in 1994 and is now on display at Hawick Museum. A new cup was presented in 1994 by Lyle & Scott and Jim Knox claimed it’s maiden win.