If you’ve been around since 1889, you will surely have formed one or two traditions or maybe customs that over the years have engrained themselves in your psyche.

A default status that simply gets done.  Why?  Because it’s needed!  It symbolises a point in the year, an event or date that makes everyone aware that this is it, this is where it starts.

Saturday 3rd of September saw Scotland’s third oldest running club carry out a such a tradition.  Witnessed and accompanied by members covering nine decades, Teviotdale Harriers set off on their ‘Opening Run.’  The point that officially marks the beginning of Cross Country Season.

The formal side of the event is to unveil the chosen club captains for the season, gather and grin for the official photo and then the fun part, as everyone heads out on mass for the first run of the season. 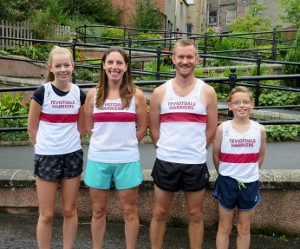 All four have shown a dedication to the club and a commitment to training and  racing that made them ideal candidates.  It’s most definitely a title that is earned in the years and months prior to being awarded.  I’m sure all four will carry out their roles with purpose and enthusiasm.

With the photo complete the group set off, led by the four Captains. Heading past ‘The Cauld,’ and momentarily breaking stride to smile and wave as Gibby filmed the event, to pause at the Park Gates.

At this point the group split and the Juniors and Seniors (including three determined Juniors, well done girls) set off on separate routes.  Lauren Corbett and Sylvia Grieve had fun with the Juniors, whilst the Seniors ventured in to the countryside.

Taking in many regular running sites, the Senior group ran past Wiltonburn, up the ‘Pipe Line,’ down to Borthaugh, crossed to run up past Martinshouse and made their way along ‘The Fishermans Walk.’

With all runners finishing back at the clubrooms, a few stories were shared and the anticipation grew for the coming season.  Hopefully it will be a season filled with success, hopefully the number of juniors at training will keep climbing upwards, hopefully everyone enjoys themselves.

Don’t be to concerned though if all targets aren’t met.  There aren’t any guarantees. Oh wait…there is one thing that you can guarantee.  The Harriers will be back in a years time to do it all again.