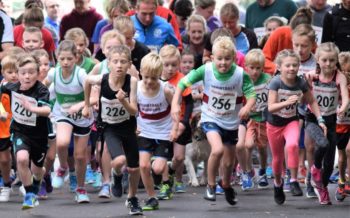 On a day filled with smiles and sweat in equal measure, an impressive 177 runners gathered from near and far to compete for 14 titles with Hawick runners securing six of them.

After months of planning, the efforts of all those behind the scenes were equalled by those who stood on the start line and put one foot in front of the other to gain their hard earned medals but more importantly the right to say, “I did it.” The weather gods also played their part with tranquil overcast conditions which no doubt pleased the majority of runners.

Following registration at the Hawick and Wilton Cricket Club for their chosen event, competitors made their way across to the start at the Park Gates with emotions ranging from quiet confidence to sheer trepidation.

The well signed 10k/5k route led runners through Wilton Lodge Park up onto Wilton Park Road and along the road to Martin’s Bridge. Turning left back to Hawick, the course followed the path past Parkdaill all the way to Hawick High School before sweeping left into St George’s Lane and over the bridge. With the Fun Runners route following the path around the Park.

The high standard 10k race drew and impressive field of 60 competitors, which included Edinburgh AC’s Callum Reid hoping for a hat trick of victories, alongside 5k course record holder Marcus D’Agrosa of Gala Harriers. As expected the pair featured prominently but ultimately both men had to settle for the minor podium places.

Ian Harding of Morpeth Harriers proved to be the runaway winner of the men’s race. Once hitting the front Harding was not to be caught and completed the two lap 10k course in a hugely impressive 31:40. Edinburgh’s Reid and Gala’s D’Agrosa matched each other stride for stride around the first lap but a concerted effort from Reid managed to open a gap that was not to be closed. Reid (33:46) claimed second with D’Agrosa (34:11) not far behind in third. Greg Walker (35:21) returned home first for Teviotdale, running strongly for fourth place overall.

In the women’s race, Sarah Green of Gala Harriers romped home to stop the clock at 39:13. Green finished 16th overall and must be truly satisfied with her run. Arlene Botha (48:17) running for Galavanters scooped second with fellow Galavanter Charlotte Harvey (48:50) claiming third.

The one lap 5k race, starting at the same time as the 10k, saw another 49 runners make their way around the streets of Hawick. It was in the 5k where Teviotdale Harriers would prove the dominant club. Fraser Clyne, Iona Jamieson, Donna Inglis and Conan Harper all claimed victories in various categories.

In the men’s race, local High School pupil Fraser Clyne kicked into gear during the last mile to break away from his nearest rival and win in 17:42. Cameron Bullen (17:59) of Team East Lothian worked hard to finish second with Teviotdale’s Thomas MacAskill (20:15) securing third. First over 40 Vet in the men’s race was Jedburgh’s James Clamp (20:25) with the under 16 Boy’s Champion being crowned Conan Harper (18:55) of Teviotdale Harriers. Young Harper impressively crossed the line third overall.

In the women’s 5k race Teviotdale secured a clean sweep. Iona Jamieson led them all home in 20:45 with a fantastic run. Michelle Short (21:13) took second with Maisie Ballantyne (24:51) third. Donna Inglis (26:09) completed the Harriers 5k dominance by returning victorious in the women’s over 40 Vet race.

Arguably the best race of the day was the first away, 68 runners lined up to race, jog or walk their way around the two mile Fun Run. The inspiring sight and sense of achievement was palpable as Mum’s, Dad’s, brothers and sisters, all with one goal, helped and encouraged each other to stay the course.

There was a race to be won and Teviotdale Harriers Irvine Welsh returned the Boys Champion. Wilton Primary School pupil Welsh, crossed the line in 13:29. Second place on the day went to Gala Harriers runner Jack McDonald (15:00) with Harris McDonald (15:21) also Gala in third.

Speaking after the event, Chief Organiser Paul Lockie of the Teviotdale Harriers gave his thoughts: “It was great to see so many runners young and not so young on the start line all eager to go when the starter fired the gun. Some were determined to win, some pushing for PB’s and some out to enjoy a run where the challenge was to finish and after picking up a medal, most tucked into to tea and tray bakes at the presentation. Some even came away with a spot prize. I am grateful to all the runners and all the helpers who volunteered their time to make the day such a success.”

Club captain Bruce Hughes added: “After many months of planning, Teviotdale Harriers along with the support of JogScotland managed to host what proved to be a hugely popular run. As with every event such as this it would not be possible without those behind the scenes. A huge thanks must go everyone who contributed in any way and to Think Fitness and Hawick and Wilton Cricket Club for their continued support.”

Pics thanks to the Corbetts’ for the 10k/5k here

Pics thanks to the Corbetts’ for the Fun Run here