A bright but blustery day greeted Teviotdale Harriers on Saturday past, as they hosted the Christie Cup.  With a new season upon us and lots of new faces competing there was excitement in the air as registration took place next to the café in Wilton Lodge Park.  First race of the day was the junior boys and girls with 20 enthusiastic competitors ready to go including first-timers Chloe Walker, Sarah & Emily MacLeod, Ivan Watson, Hamish Devlin, Parker Johnston, Alyx Armstrong and Hana Renwick.  With a one lap route of 897m the youngsters started at the café, past both the Steve Hislop and Jimmy Guthrie memorials, then the shelter and the bandstand to finish back at the café, smiling all the way every one of the youngsters gave it their best effort.  Chloe Walker soon took the lead and although chased down the final straight, retained her lead all the way to the finish line to take gold in a time of 4:05, it was a family affair claiming 2nd and 3rd spots, with elder sister Sarah taking silver in 4:09 and younger sister Emily bronze in 4:11.  The boys followed the same pattern with only one second separating each of them in a fiercely fought competition, Greg Watson came out the victor in a time of 4:18, hot on his heels for 2nd place was Calan Pender Mills in 4:19 and 3rd was Langholm’s own James Wood in 4:20 who had managed to shave off a good few seconds on his time from last year.  A very exciting race to watch.  All the times include handicaps, fastest actual times for girls – Chloe Walker, for boys – Irvine Welsh.  All trophies and medals will be presented at the club’s presentation night in March and these six will be the first on the stage.

Next up it was the combined race of senior ladies and U15/17 boys and girls with both Robert Wood and Ava Hughes moving up a category to run with the seniors.  Another change was the increase in distance, moving from 2 laps on the same route as the juniors to 3 and a ‘bit’ laps on the same course covering a distance of approximately 3,000 metres.  With a strong headwind and quite a bit of heat in the sun the 13 competitors took off.  Positions remained much the same on the first lap with changes beginning on the second and third, but there was one position in no doubt.  – 1st male, Conan Harper moved quickly through the field at a blistering pace to take a huge lead and crossed victoriously in 13:50.  Second for the boys and second over the line was Thomas MacAskill in 14:08.  Next to cross the line and take the title of 1st female was Ava Hughes showing the new category and new distance were no problem to her in a time of 14:10, with only a second separating them, Robbie Welsh crossed in 14:11 to take 3rd.  Second place for the ladies went to Maisie Ballantyne in 14:39 followed in at 14:45 by Kirsty Hughes, Ava’s mum, keeping it in the family with her bronze to complement Ava’s gold.   Again, all times include handicaps, fastest actual times – Conan Harper and Maisie Ballantyne.

Finally, it was the men to run, 10 competitors on the line with an age range of 30s to over 70s, having watched the other categories they were hyped up and ready to go.  Showing a family trait, Brian Harper eased his way up through the pack to take the lead, maintaining it and finishing strongly in a time of 14:22, Derek Clyne was next in 14:43, followed 2 seconds later by Alan Inglis who took 3rd spot in 14:45. Fastest actual time Alan Inglis.  All times include handicaps, for full results and photographs see teviotdaleharriers.org.uk. 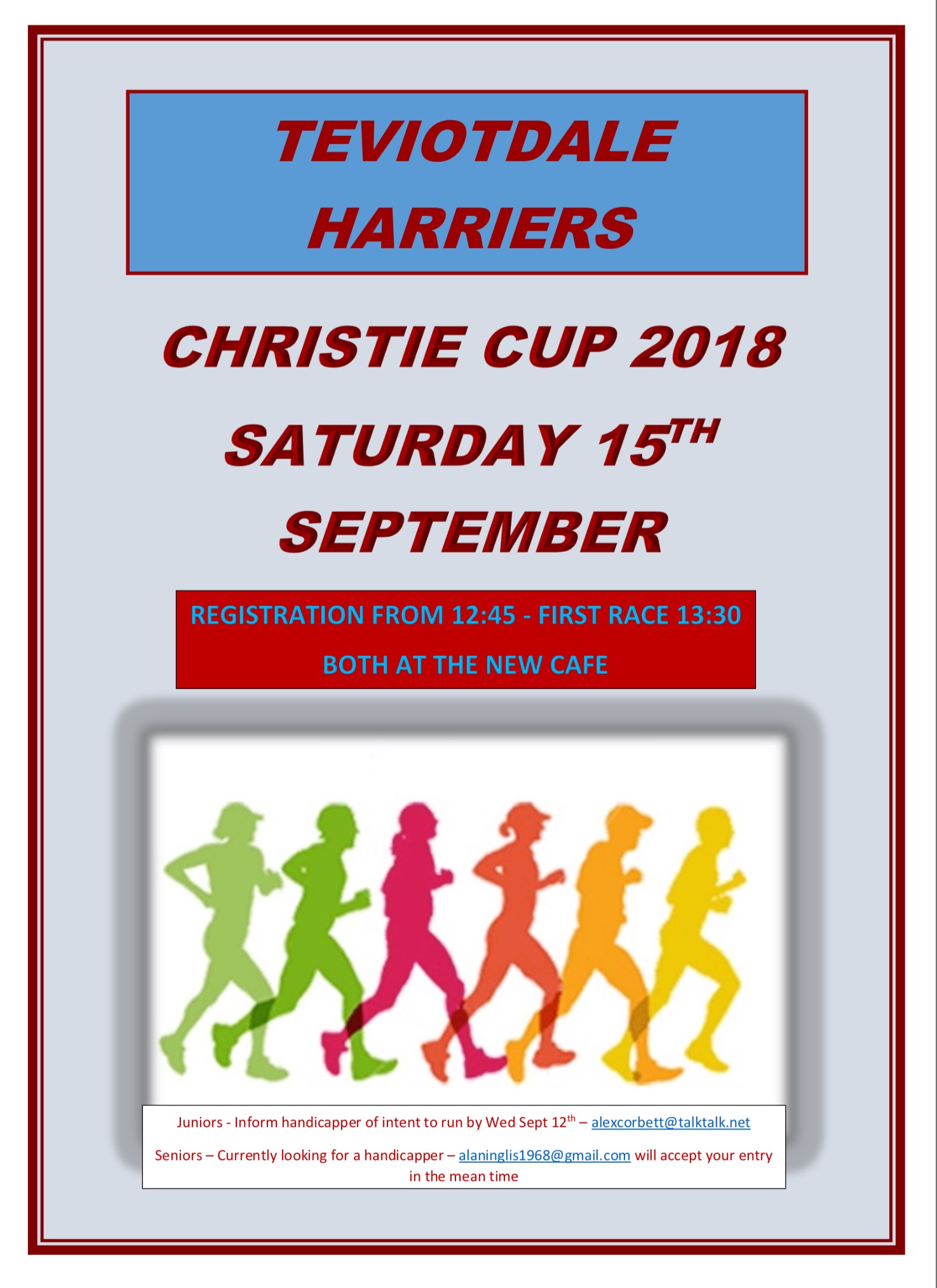 The first club race of the new season is on Saturday, 15th September. Race start and registration is at the new cafe in Wilton lodge Park. Registration from 12:45pm onward with the first race off at 1:30pm prompt. END_OF_DOCUMENT_TOKEN_TO_BE_REPLACED