It was festive family fun with a jingle all the way for Teviotdale Harriers on Sunday as the club staged it’s traditional Christmas Relays. 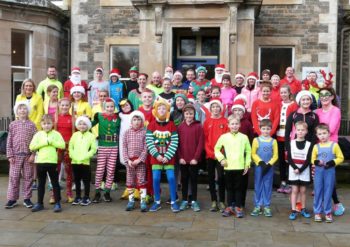 52 merry runners supported by joyful family and friends gathered for this Christmas cracker. Six teams of nine (because of numbers Lewis Renwick and Euan Welsh both showed great spirit and ran two legs for their respective teams) battled it out over the two route course. A shorter loop for the first five runners and a slightly further circuit for the final four. With an array of fabulous prizes such as Christmas cake, Yule logs, mince pies and shortbread at stake, this fun event still carried a competitive edge.

The lead changed hands on quite a few occasions but once team six hit the front during the seventh leg, there was to be no catching them. Lewis Renwick, Holly Grieve, Ava Hughes, Lewis again, Sam Allott, Ann Aitken, Conan Harper, Fraser Clyne and Alan Inglis streaked home to claim the win.

After the race everyone made their way to the Buccleuch Bowling Club for the presentation where every runner received a prize. This was followed by the 38 prize raffle which proved to be a huge success.

A massive thank you must go to all who donated to the raffle and Sylvia Grieve for arranging the hampers and prizes. Thanks also to Pam Paxton for her work organising the squares, Grant Moyes for access to the Buccleuch Bowling Club, Alex And Anne Corbett for registration, team selection and photos. Finally to all runners and supporters who joined in and contributed to this hugely successful day.

Merry Christmas everyone from all at Teviotdale Harriers. Keep up the training and we’ll see you in the New Year.