The cream of Scottish cross country running was on display, resulting in fierce and fast competition with eight national titles up for grabs. 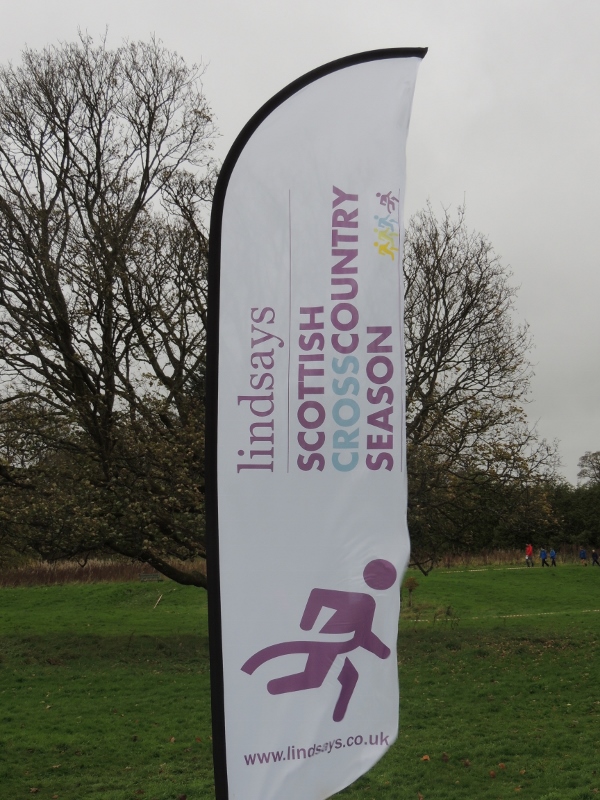 In blustery conditions around a course with a few sharp hills to sap the legs, the seven and a bit teams representing the club gave gutsy performances across all the categories with one or two standout runs amongst them.

With the base tent being erected, Alan Inglis took the juniors on a much needed warm up and we were almost ready for the action to commence.

Ready to run leg one, Iona Jamieson and Ava Hughes stood alongside the rest of the under 13 girls. As the starter’s gun fired, elbows flew and the pack of young girls all pushed and jostled desperate for a fast start.

Iona (10:42) ran a fabulous first leg and at the changeover was in 13th place as Maisie Ballantyne set off on leg two. Ava (12:48) tired slightly through the second half of the loop but raced hard to the line picking up a place or two to let Kelly McKay away in 82nd position.

Maisie (12:04) ran competitively and still looked strong as she completed her leg with the team now in 43rd. Meanwhile Kelly was finding the course conditions quite difficult as around the first small loop she lost one of her trainers in the mud, gamely she continued on, no doubt slipping at every turn. As she made her way towards the finish line, Kelly (13:21) was 84th and clutched something in her hand, unbelievably her other trainer had also come off. Huge credit must go to Kelly though as the timing chip was attached to this trainer and she had the presence of mind to pick it up and carry it the rest of the way. No timing chip would have resulted in a disqualification.

The junior boy’s race followed the same 3 lap race as the girls before and would be contested by 96 full teams. Conan Harper and Callum Renwick started the race among the under 13’s. Thomas MacAskill (U15) and Fraser Clyne (U17) would complete team ‘A.’ Callum however was on his own with no other members in the ‘B’ team.

Junior Boys Club Captain Conan, like Iona before him, started fast and got himself amongst the leaders around the early stages. Conan (9:48) pushed all the way and again Teviotdale were 13th after leg one. Callum (11:59) showed great character to dig deep and finish off with a sprint to cross the line in 102nd.

The senior/masters/over 50’s women were the next and all raced at the same time. An impressive 49 complete senior teams declared for the four leg race. Teviotdale could have fielded a competitive master’s team but decided to compete in the senior category as only three runners were needed for the master’s team. Kirsty Hughes would lead them out, followed by Donna Inglis, Ann Aitken and final leg runner Pauline McAdam.

The final race of the day, also over the four lap 4000m course, included 3 full Teviotdale Harriers teams with one in each of the three age brackets. Running for Teviotdale in the 88 team senior race was Men’s Club Captain Greg Walker, then dad, Alastair Walker, Bruce Hughes and last leg runner Rory Anderson.

The masters team, competing against 29 others, included Alan Inglis, Raymond Jaffray, Brian Harper and Alister Biggar and our third team would compete in the 21 team, over 50’s category with Paul Lockie, Alan Coltman and Bill Knox the running order.

Perpetual performer Alastair ‘Sammy’ Walker has plenty previous when it comes to this event. Sammy was part of a hugely successful Harriers team alongside K. Logan, R. Hall and D. Cavers that previously won this National title at Inverness in the 89/90 season.

Walker senior completed his fine leg in 14:45, lifting the team to 54th. Raymond (16:38), enjoying a return to competitive running, claimed one place on route to set Brian off in 20th position. Alan C (20:08) gained a place and handed over to the waiting Bill in 20th.

The next event on the Harriers calendar is this weekend’s Jubilee Races up the Mare, which start at 1:30pm. Followed that evening at the Cricket Club by a quiz where all friends and family are welcome.