Saturday 3rd February saw some of the more mature members of Teviotdale Harriers take to the road for the journey north west to Kilmarnock to compete in the Scottish Masters, writes Alan Inglis.

With an approximate combined age of over 600 years on the minibus, the group of runners and supporters set off in pretty dismal weather conditions but on arrival at their destination the skies brightened and the sleety rain lifted.  Registration was held in the newly built visitor centre where the group enjoyed some pre-run refreshments and a look around the gift shop.  The walk to the course through the newly developed Deans Castle and Country Park was undulating to say the least and tested those pulling the tent on the trolley but the fields of rare breed sheep and fallow deer were a welcome distraction to what lay ahead.

To quote Scottish Athletics “To say conditions were muddy would be an understatement. There was mud and hills and muddy hills, plus a horses’ field, tree roots to negotiate, paths with mats thereon and, not to forget, a log to hurdle on a steep uphill. It was, as organisers and host club Kilmarnock Harriers had promised, ‘proper cross country’ and a mental as well as physical battle “.

At this event the over 65 men run with the women and amongst the 133 entrants Teviotdale had 4 competitors in Bill Knox, Ladies Captain Pauline McAdam, Ann Aitken and Donna Inglis.  Covering a distance of 6,000m this 2 lap course began with a slight downhill then a gentle rise to join a path before leading into a well churned up field.  A welcome long downhill followed, only to be climbed again after a loop of the field below, before descending the mud covered steps to then jump the log on the uphill which served to further sap the legs before navigating the tree roots in the woods.  Then back to the start line to do it all again.  First home in this group was Pauline in 35:16, an impressive 7th in her age category W60, Bill completed in 36:22, 14th in his M65 category, Ann Aitken in 37:05, 28th in her W45 category then Donna Inglis in 37:21, 29th in her W50 category. 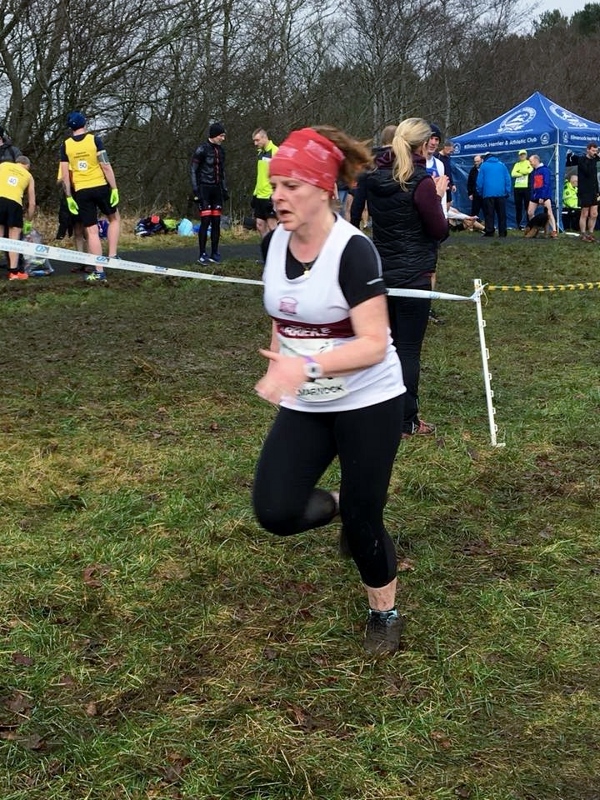 Next up were the senior men in the 40-60 categories.  They followed the same 2 lap route but with an additional punishing shorter lap of the said horses’ field giving them a total distance of 8,000m to cover.  There were an impressive 237 entrants in this race including 5 Teviotdale Harriers.  First home was John Tullie in a time of 36:41, an impressive 8th in his M60 category, both Alan Inglis and Alister Biggar represented Teviotdale in the M45 category with Alan 40th in a time of 38:46, and Alister 53rd in 41:55.  Paul Lockie and Alan Coltman were the club’s M50 entrants with Paul 50th in 48:16 and Alan Coltman 51st in 48:43.

Next race for Teviotdale Harriers is the Club Championships on    Saturday 10th February.  Registration from 12.45pm at Hawick Museum.