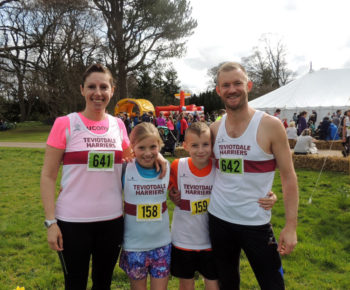 On Saturday 9th of April, four members of Teviotdale Harriers made their way to historic Winton House near Tranent, to take part in the Winton 10k, 5k trail run and 3.5k fun run.

Bruce and Kirsty Hughes tackled the idyllic 10k route, whilst Boyd and Ava Hughes set off around the impressive 3.5k fun run.

Just under 600 runners/joggers/walkers turned up to race/jog/amble through some of East Lothian’s most beautiful countryside.  The impressive category A listed building was the setting from where entrants assembled and on the sound of the hooter started their afternoon’s activities.

Staggered starts meant 10k runners were away first and with the sun shining brightly Bruce and Kirsty took off to take on the trail.  After an initial 1km of road, competitors began the roaming, twisting and meandering route which followed private tracks or footpath networks within the Estate.

Well marshalled and comprehensively signed posted, there was nothing to do but appreciate the charm and allure of the serene path…if the on setting tiredness allowed.  Don’t be fooled by the poetic description though, for this course was a testing examination of any competent runner.

The 91 participants set off next in the 5k, followed by the 263 fun runners heading around the 3.5k loop.  This would be Boyd and Ava’s turn to head out into the unspoiled Winton woods.  Initially heading in different directions, all participants eventually merged to follow the same route back. 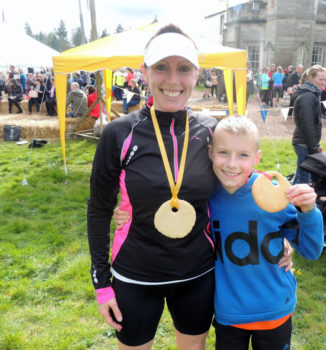 This provided Bruce and Kirsty the tricky task of negotiating buggies, dogs and walkers, happily meeting their own challenges of the day.  Zig-zagging through the last third of the race, eventually led to a split and the 10k runners branched right to head over the final section of the course.  The concluding climb to the finish tested all runners but it was worth it as your ‘biscuit medal’ was there waiting you.

Times and places were not important though as Winton proved to be a welcoming, atmospheric and well organised event.  All ages and abilities turned out to take part in their own special way, contributing to a special day.  Goodie bags with water, fruit, pens and vouchers were also a winning touch.