Saturday 9th September proved to be one of the most memorable and encouraging days in recent Teviotdale Harriers history, with over 70 runners gathering to participate in the traditional ‘opening run.’

The biggest turnout for many a year, with runners aged from four to 84, really showed the healthy state our local running club currently finds itself enjoying.

As well as signalling the start of the new season by announcing the recently elected Captains, the club also paid special tribute to the many Captains who have served the Harriers with such distinction over the last 128 years in a social event at Hawick and Wilton Cricket Club.

Gathering at the club rooms last Saturday, the myriad of Harriers vests buzzed around like a swarm of bees, awaiting the introduction of the Captains for the 2017-18 season. Club President Alan Coltman called them forward and Greg Walker, Pauline McAdam, Conan Harper and Lucy Ash proudly sat front and center for the customary photo. 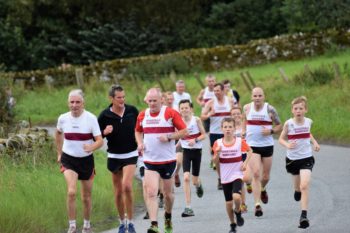 Men’s and Ladies Captains, Greg and Pauline, flanked by Junior Boys and Girls Captains, Conan and Lucy then led runners into the scenic Hawick countryside as ritual dictates. The route chosen (Captains choice), ventured up Wilton Dean, through Scawmill and up Wiltonburn Hill to touch the ‘White Stane.’ Borthaugh and Martins Bridge then followed before heading through the park to finish back at the clubrooms. For the younger runners there was Fun and Games in the park under the watchful eyes of four genuine Harriers. 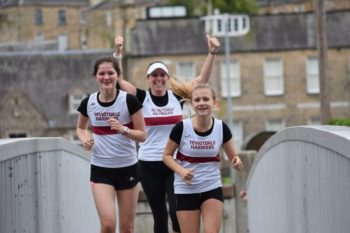 Following the hugely enjoyable opening run, the bar was then raised again as around 100 family and friends congregated at the Cricket Club for a special evening to mark the role of Harriers Club Captain.

Recently the Teviotdale Harriers Committee agreed it would be a good idea to recognise the important and noted position of Club Captain with a memento. Upon further discussion it was decided that retrospectively all past Captains should receive a keepsake for their time and efforts at the club. 1956 Captain Jake Douglas was the first of over 40 past and present Captains to step forward to receive their symbolic badge in person.

Giving his thoughts on being chosen, Greg couldn’t hide his pride: “I’m delighted to be captain and lead the club for the next season. It’s great to add my name to the long list of great runners and club stalwarts who have previously held the post.”

Explaining what he felt the job entails, Greg added: “I think the role requires me to be an ambassador for the club, both in Hawick and at national events where I look forward to leading from the front.”