Lauren Corbett made it three Ladies wins in a row on Saturday as Teviotdale Harriers competed up Hawick Mair for the Jubilee Trophies.  Scott Watson, Jai Patterson, Conan Harper and Ava Hughes were also victorious as biting chilly winds blew across the town’s race course. 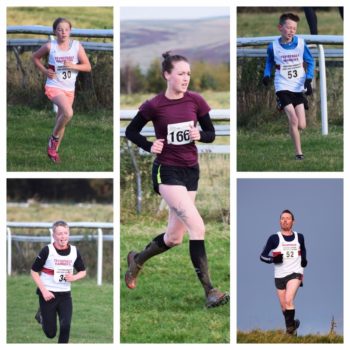 In what is perhaps the toughest club race of the season for juniors, 13 resolute runners lined up for the boys and girls under11/13 category, including first time competitor Abbie McGaughey.  It was rapidly improving Ava Hughes who would rise to the occasion to lead home the bakers dozen of runners.

Ava took off with purpose and once she found herself at the front there was no catching her and she crossed the line in a winning time of 13:20 (all times include handicaps).  The impressive looking Iona Jamieson ran well to take second in 14:33, with a spirited run from Nadine Elder securing third in 14:59.  Iona also achieved the fastest actual time for the girls.

In the competitive u11/13 boys race Conan Harper and Thomas MacAskill were set off together as joint back markers in the handicap.  As the starter said go, both runners showed their obvious intent and teared along the track before heading out into the surrounding countryside.

Conan worked hard to come through the field from his scratch mark and after runners re-joined the race course and turned the bottom bend, Conan powered up the winning straight to victory in a time of 13:27.  Diminutive, gutsy Irvine Welsh ran on gamely for second in 13:47 and Junior Captain Thomas MacAskill followed in not too far behind in 13:53 for third.  Conan ran the fastest actual time.

Next race on track was the under 15/17 boys-girls/women’s race.  Again 13 runners lined up and in the girls/women’s race, back marker Lauren Corbett made it five wins in the last ten Jubilee races, whilst securing her hat-trick.

Lauren steadily worked through to field before hitting the front at the start of the final bend to win in 21:10.  Sophie Allott, having recently moved up to this category, ran doggedly and was made to battle all the way to the line.  Young Sophie finished second in 21:16 and had to fend off a tenacious finish from Kirsty Hughes who eventually succumbed to third in 21:18.  Lauren ran the fastest actual time.

Jai Patterson, continuing his return to Harriers club races following injury issues, showed what a talent he is.  Jai streaked home in the u15/17 boy’s race, claiming victory in 20:29.  Last year’s champion Fraser Clyne, also ran well but had to settle for second in 21:04.  Euan Welsh stoutly stuck it out and finished third in 22:27.  Fraser claimed the fastest actual time.

This left only the Senior Men to compete and 18 were there to battle it out for the Jubilee Trophy.  Scott Watson manged to navigate the course first and deservedly claimed the title, stopping the clock at 34:16, Scott secured his first club victory in over a decade in the process.  Harriers stalwart Brian Gibb took some catching however and ran on well for a merited second place in 34:33.

Heading up the last 200m Rory Anderson sat third but Bruce Hughes managed to find the speed to out kick Rory and take the bronze in the last 10m, in a time of 34:37.  Rory had to settle for fourth but left with the fastest actual time.

Following the successful races many Harriers headed to the Buccleuch Bowling Club to share a drink and a story, whilst enjoying a buffet kindly supplied by life member Grant Moyes.  Grant splashed out for the spread to commemorate his very own Jubilee victory some 60 years earlier.