I sit here two days after the Coledale Horseshoe and the pain that   continues to tremble through my quad muscles reminds me of the sheer fun that was had on Saturday morning in the stunning, breath-taking, fell running dreamland of the Lake District.

A few weeks back as I worked extremely hard in my Monday to Friday office job, I decided to ask on the forever popular WhatsApp messenger if there were any hill races forthcoming that anyone was attending. With the completion of the cross country season and a pleasant break before the summer games circuit I wanted to try something a little different, variation in running always keeps you on your toes. Looking back at the messages thrown between our ‘runners’ group, Mr Kenny Short suggested Coledale Horseshoe, with the following quote; “Just the race for you Rory!! Easy!” The conversation was left at that however and I pencilled it in to my diary with the full intention of doing anything but that race on the 7th of April.

But come 8.25am on Saturday morning, there I was sitting in Kenny’s swanky transit van along with Derek McHugh, heading south of the Border to the picturesque village of Braithwaite. The chat on the way down was out of the top drawer. The fear tactics from the old boys however didn’t encourage my already flaky decision to attempt this fell race. Approaching the village, the hills surrounded us in all directions, spots of snow remained on the highest of peaks…the ones we were to clamber up.

In usual Mr Short fashion we arrived with only 30mins to spare before the racers were set on their way. Quickly organising our survival bag (waterproofs, hat, gloves, compass, whistle, map and emergency food), a hugely important requirement for fell running with the possibility of injury and being stuck in the middle of nowhere for quite some time. Derek and Kenny opted for the sensible option of an energy gel to add to their bum bag, I on the other hand packed the essential left over, half an Easter egg, the perfect sugar boost!

Number 366 pinned swiftly onto the maroon hooped vest, off-road shoes fixed to my feet and glasses pinned to my face, I was ready to venture round the 8 and a bit mile Fell race with over 3500 feet of climbing.  I mean what could possibly go wrong, my speed work training of 200m reps would surely put me in good stead for what was in front of me.

Unlike the Cross Country Races where warm ups are structured and positions are jostled for before the gun has been raised, the 300 plus fell runners trickled down to the start with conversations more important than being first to the start line. After a quick safety brief and one last demisting of my specs the energetic sound of “go” was bellowed, releasing the elite to the hobbyist on the Coledale Horseshoe 2018 Fell Race! 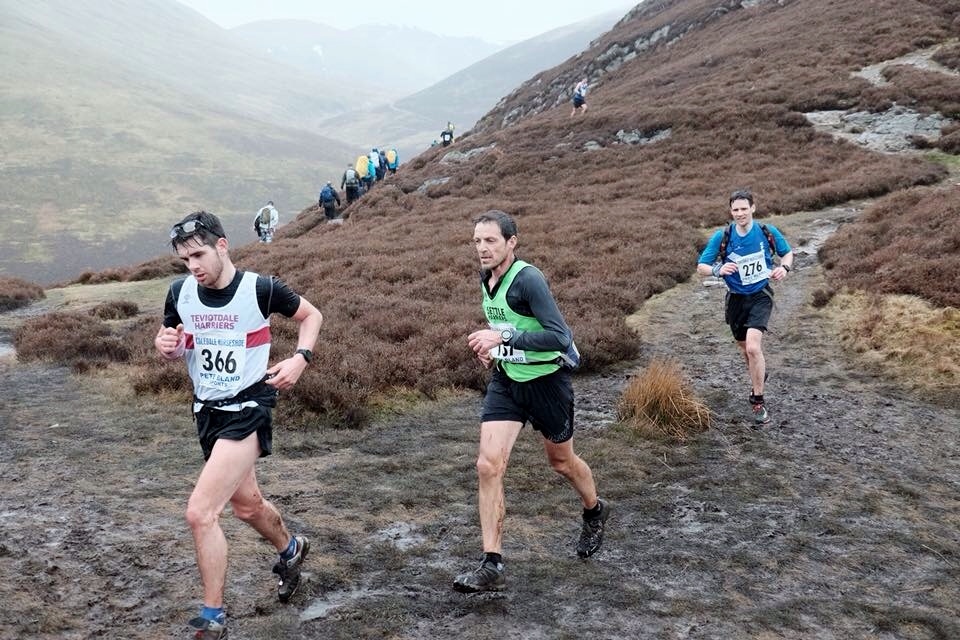 365 competitors trotted down through the village of Braithwaite at a controlled speed, the vast majority knowing what lay ahead, me on the other hand no idea what so ever. Within 800m the premature enjoyment of the run seeped out the end of my toes as the lactic acid replaced what was there before. I had approximately 2.5miles of pure climbing in-front of me to reach the summit of the first climb Grisedale Pike (791m above sea level), head down and guts it out was the only way. From the bottom to the top of the first climb it was like the ‘evolution of man’ but in reverse. 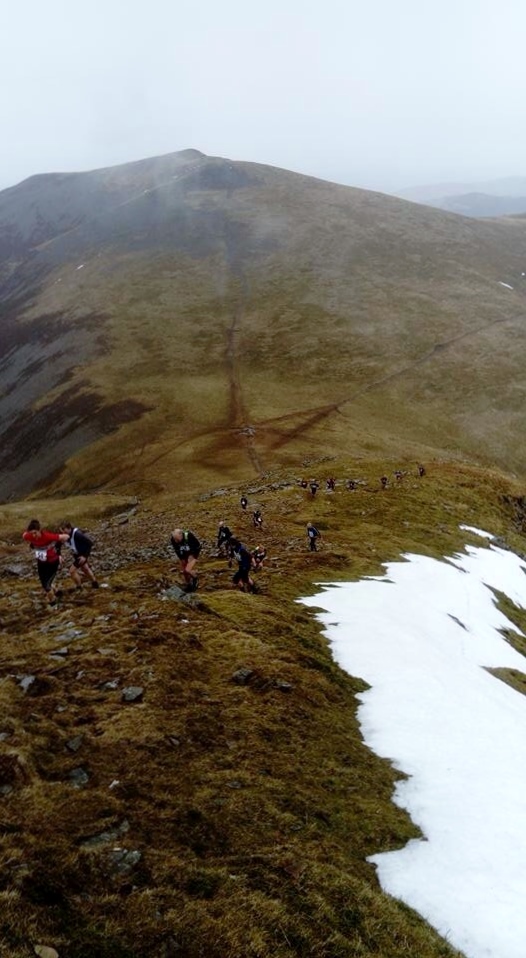 To start I ran, up straight, filling the lungs with pure countryside oxygen, the next step was jogging bent over gasping for air, step 3 walking with purpose, hands on the knees stuff until I was finally broken and the only way left to achieve the peak was to crawl on all fours. I would blame the terrain and incredible incline for this but the continuous flow of runners passing me would prove otherwise.

Once reaching the summit of Grisedale Pike, it was a mile of technical downhill fun, well that would be if my glasses hadn’t fogged up, and they were placed on my slightly over grown hair rather than my eyes. 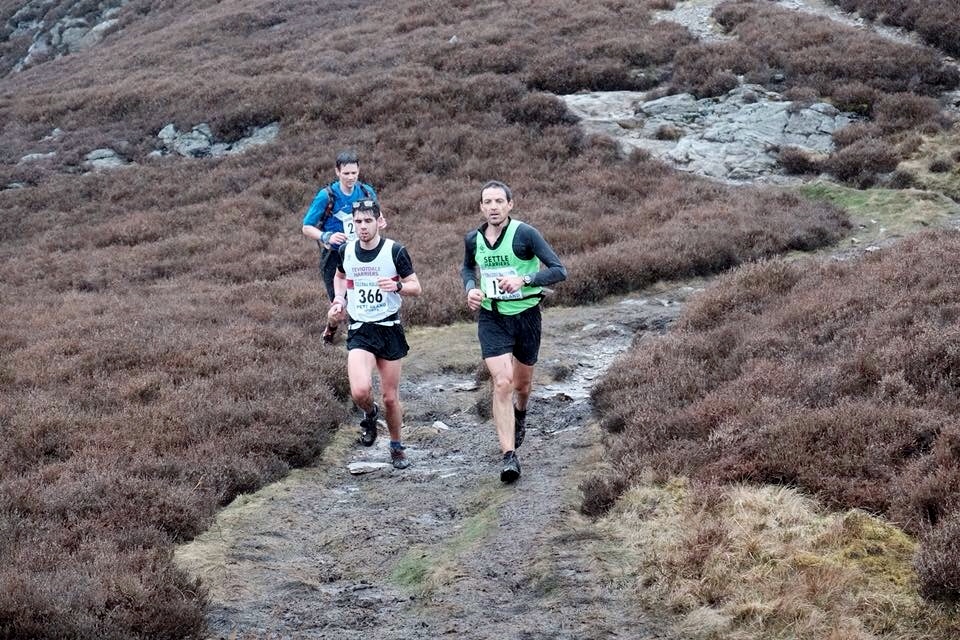 I was still able to identify however that any wrong move or slip to the left side of me and it was game over. Focus and a little stupidity got me safely down, only to raise my head again at the sight of Crag Hill (839m above sea level). I can remember vividly thinking to myself that this was like something out of the Lord of the Rings as Frodo ventured to Mount Doom! Fortunately for me this hill was of the steepness where not even the winner could run up. Grabbing lumps of grass and using the boulders to push up through your feet, the technically crazy climb with not for the faint hearted. You wouldn’t believe me if I said I wasn’t a little bit scared, I was beyond petrified but having the time of my life. Recording an impressive 16 minute and 27 second mile I manage to haul myself to the top…this meant one thing…it was downhill madness to the finish.

Carving my way down through the miner’s path I quickly identified that being local had it advantages. A couple of boys who were behind me at the top appeared now in front of me and after discussions with the two old dogs (Kenny and Derek) prior to the start of the race I knew the two gents who had just passed me knew all the short cuts to avoid the child sized rocks I had been climbing over. Latching onto them I managed to pick up a few more place before hurtling down back into Braithwaite where the crowds were applauding everyone who had accepted and successfully completed the Coledale Horseshoe 2018.

Soon after finishing, Kenny and Derek crossed the line to where we were all welcomed by tea, coffee and enough cakes to feed the 365 brave runners.

Formally I was 35th, Kenny 126th and Derek 284th but in hill running, places are just a bonus, completing the mountainous task with friends and enjoying a day out in the beautiful countryside is the whole reason for doing it. I challenge anyone to disagree with me.