Alan ‘Pye’ Reid joined Teviotdale Harriers in 1985 and during this time he was Treasurer and Handicapper for the club for 20 years.

Rob Halliday joined in 1993 and held the position of President for 10 years.  During this time he was also Captain twice.

Due to their contribution and dedication to the club, Alan and Rob were made life members earlier this year.

Congratulations to them both from all in the Harriers. 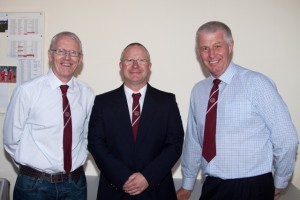