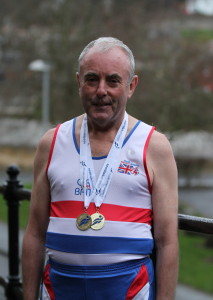 Francis Cannon achieved success in the Scottish Masters Championships which were held in June at Pitreavie.  Running in the 800 mts M.60, he won Gold.  An hour later he ran in the 400 mts winning his second Gold medal. 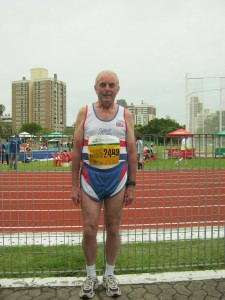 “I have recently returned from competing in the World Masters Championships in Porto Alegre,  Brazil.  I was competing in the 65yr age group in the 800mts which was run as a semi-final. My time of 3mins 02 secs wasn’t enough to qualify for the final.  Unfortunately due to an Achilles Tendon injury I was unable to run with any effort which was a huge disappointment as earlier on in the summer I was running faster times winning the Scottish 800mts title in 2mins 42secs before picking up this injury. Participating in World Masters Championships has taken me, after my 1st in Gateshead, to Denmark, Italy, USA  and now Brazil. This was for me the experience of a lifetime.”

Many congratulations to Francis on all his achievements to date from everyone involved with the Club and we wish him a speedy recovery from his Achilles injury.